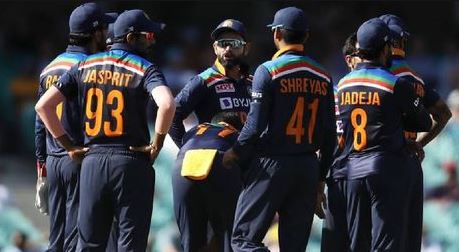 The last match of the three-match T20 series between India and Australia was played at the Sydney Cricket Ground. Kangaroo team won this match. On the other hand, India, captained by Virat Kohli, has been hit twice. One, the Indian team could not clear the Australian team’s sweep after losing their match. Secondly, the Indian team has been found guilty of the minimum over rate in this match and the International Cricket Council (ICC) has fined all the players.

The Indian team has been fined 20 per cent of the match fees for maintaining a slow over rate against Australia in the third T20 match held at the Sydney Cricket Ground on Tuesday. Match referee David Boon of Emirates ICC Elite Panel has imposed this penalty on India. India could not bowl the overs, which was cleared by the match referee. This is the reason why the ICC has issued a decree to all the players of the Indian team, including captain Virat Kohli, to deduct 20–20 percent match fees as a punishment.

Indian players have been convicted under Article 2.22 of the ICC Code of Conduct, which deals with minimum over-rate offenses. For this reason, players are fined 20 percent of their match fees, because the bowlers do not throw their overs in the allotted time. On-field umpire Rod Tucker, Gerard Abode, TV umpire Paul Wilson and fourth umpire Sam Nogazski accused the Indian team of slow over rate. Virat Kohli, the captain of the Indian cricket team, accepted the charge and accepted the punishment. Therefore, there is no need for a formal hearing. This is the second time on this tour that the Indian team has been fined due to the slow-over rate.

I am trying to hold one end up and let bowler from other end attack: Gujarat Titans all-rounder Rashid Khan