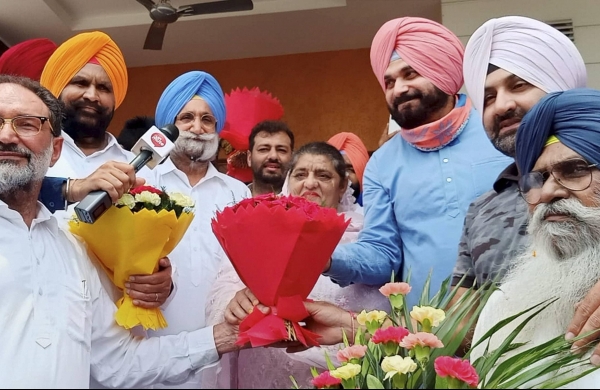 By ANI
CHANDIGARH: Amid the political tussle, ten Congress MLAs on Sunday urged the party high command ‘not to let down’ Punjab Chief Minister Captain Amarinder Singh, “due to whose unrelenting efforts the party stands well-entrenched” in the state.

The MLAs in a letter said, “there was no doubt that the appointment of state PPCC chief was the prerogative of the party high command but at the same time washing dirty linen in public has only decreased the party graph during the last couple of months.”

In a statement, the MLAs said that it was due to Amarinder Singh that the party regained power in Punjab “in the aftermath of the 1984 attack on Darbar Sahib and the subsequent genocide of the Sikhs in Delhi and elsewhere in the country.”

“Captain Amarinder Singh commanded immense respect across different sections of the society in the state, particularly the farmers for whom he even endangered his chair as CM while passing the 2004 Termination of Waters Agreement Act,” they said.

The statement added that since ‘merely six months are left for the elections’, and pulling the party into the different directions will only harm its prospects in the 2022 polls.

MLAs also demanded that Navjot Singh Sidhu who had made numerous tweets against Capt Amarinder Singh and the government should tender a public apology “so that the party and government can function in tandem.”

Calling Sidhu a ‘celebrity’, MLAs said there is “no doubt an asset to the party but condemning and criticising his own party and government in the in public view has only created a rift in the cadres and weakened it.”

The MLAs said they hoped the party high command would take cognizance of their suggestions and will definitely keep in mind the status, contribution and background of the Punjab CM in mind while making vital decisions for the party.