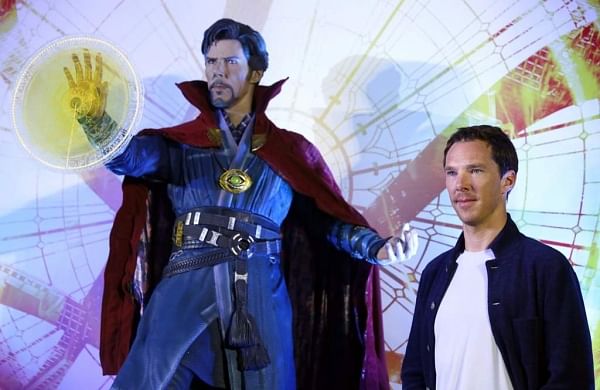 LOS ANGELES: English star Benedict Cumberbatch-starrer ‘Doctor Strange in the Multiverse of Madness’ has raked in $185 million at North American movie theaters over the weekend, reaffirming the box office dominance of Disney’s Marvel Cinematic Universe (MCU) after a shakier, pandemic-battered year for the sprawling franchise.According to ‘Variety’, “The timeline-bending ‘Doctor Strange in the Multiverse of Madness’ represents a return to form for Disney’s MCU after Covid-era releases ‘Black Widow’ ($80 million debut, plus $60 million on Disney Plus), ‘Shang-Chi and the Legend of the Ten Rings’ ($75 million debut) and ‘Eternals’ ($71 million debut). Due to the pandemic and other extenuating circumstances, those installments failed to live up to their franchise predecessors in terms of ticket sales.”Those box office returns mark the 11th biggest opening weekend in history. Given the anomaly of reaching those heights, ‘Doctor Strange 2’ easily delivered the biggest opening weekend of 2022, as well as the second-biggest debut in Covid times. Overseas, the film earned $265 million from 49 territories, taking the global total to $450 million.Since ‘Doctor Strange 2’ is not likely to play in China, Russia or Ukraine, the film will rely on repeat viewings from audiences around the globe to push ticket sales past the coveted $1 billion mark. Only ‘Spider-Man: No Way Home’ has been able to cross that threshold since Covid took hold.At the domestic box office, the ‘Doctor Strange’ follow-up outgrossed its predecessor’s entire opening weekend tally in a single day.’Multiverse of Madness’ made $90 million on Friday alone, while the 2016 adventure ‘Doctor Strange’ brought in $85 million between Friday and Sunday.Marvel and other major franchise films tend to be front-loaded in terms of ticket sales because fans want to be among the first to see the movie — lest spoilers appear online and ruin the fun. Still, the sequel will quickly blow past the final box office tally of the original ‘Doctor Strange’, which ended its theatrical run with $232 million domestically and $677 million globally.’Doctor Strange 2′ is benefitting as the follow-up film to Sony’s box office behemoth ‘Spider-Man: No Way Home’,which became a must-see movie event and grossed $1.89 billion worldwide. With Peter Parker’s tantalising adventures as a precursor, plus Disney’s marketing machine heavily teasing some big surprise cameos, ‘Doctor Strange’ landed in rarified air — even for a Marvel movie.Since the franchise now spans the big and small screen, Disney Plus shows such as ‘WandaVision’ and ‘What If?’ also contributed to the excitement.Sam Raimi, the mastermind behind the original ‘Spider-Man’ trilogy, directed “Doctor Strange in the Multiverse of Madness.”The film picks up as the eponymous neurosurgeon-turned-Avenger, played by Cumberbatch, casts a dangerous spell that forces him to travel into the multiverse to face a mysterious new adversary and alternate versions of himself.Along with Cumberbatch, the cast includes Chiwetel Ejiofor as Karl Mordo, Elizabeth Olsen as Wanda Maximoff also known aa Scarlet Witch, Benedict Wong as Wong and Xochitl Gomez as America Chavez, a teen who can travel between dimensions.’Doctor Strange 2′ kicks off the summer blockbuster season with a bang. In the coming months, ‘Top Gun: Maverick’ (May 27), ‘Jurassic World Dominion’ (June 10) and ‘Thor: Love and Thunder’ (July 8) should keep theaters bustling with foot traffic.