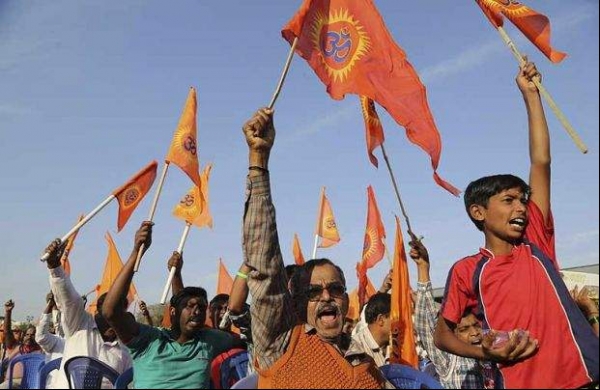 By PTI
KOLKATA: Controversy erupted over a poster found in West Bengal’s Hooghly district which warned people that strict action will be taken against couples moving around during the day of the Saraswati Puja as treating this auspicious occasion as Valentines Day, a “western culture”, is not acceptable.

For long, students – male and female – are seen spending time together on this day after paying obeisance to Devi Saraswati in their educational institutes across the state.

And thus, of late it has earned the sobriquet of Valentine’s Day of Bengalis.

The poster found pasted on a wall near the Hooghly river in Uttarpara town on Tuesday was purportedly issued by the Bajrang Dal, but a leader of the organisation said it was not involved in the incident.

The Bajrang Dal is known to be against the celebration of Valentine’s Day which, it says, is a western concept.

The poster written in Bengali also said that when “our government” will come, it will enact laws to protect “our culture” from such corruption.

The ruling Trinamool Congress described it as regressive, while the BJP said that none should issue threats on the issue.

“While we are striving to move forward, they are trying to move the society backwards,” Trinamool Congress spokesperson Kunal Ghosh said.

Claiming that those who have put up such a poster are trying to dictate how people should live their lives, Ghosh said that it is alien to the culture and ethos of Bengal.

The BJP’s West Bengal president Dilip Ghosh said that people may have their own views on such matters, but “neither politicisation nor threats on the issue are desirable.”

The saffron party has no link with the poster, he said.