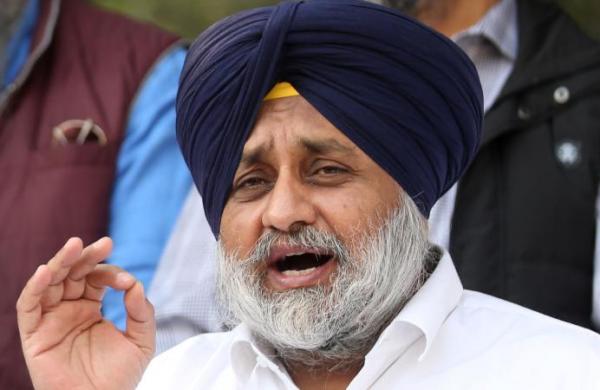 By PTI
FAZILKA: Shiromani Akali Dal chief Sukhbir Singh Badal on Monday urged Prime Minister Narendra Modi not to link the agitation against the farm laws with any religion or community and said he should instead focus on giving ‘justice’ to farmers.

The SAD chief told reporters here that farmers are on one platform against the Centre’s three contentious agricultural laws.

“We should all be clear that farmers are fighting for the welfare of the ‘annadaata’ at large and we should not try to divide this struggle by trying to limit it to one religion or community,” Badal appealed to the PM while adding that he should instead focus on ensuring ‘justice’ to farmers.

Prime Minister Narendra Modi on Monday had slammed those abusing agitating Sikh farmers, saying it won’t do the country any good as he went on to appeal to the protesting farmers to withdraw their over two-month-long stir and give the new agriculture reform laws a chance.

Thousands of farmers have been protesting since late November at the Delhi borders with Haryana and Uttar Pradesh, demanding a rollback of three farm laws.

SAD chief Sukhbir Singh Badal, who was here to address ward-level meetings ahead of the February 14 civic body polls in the state, also slammed the ruling Congress, accusing it of unleashing ‘goondaism’.

He urged the SAD workers to be resolute and ensure the victory of Akali candidates.

He alleged that even though there was a ‘complete collapse’ of the law and order and the State Election Commission (SEC) had ‘abrogated’ its constitutional duty, the SAD will not be cowed down by such ‘tactics’.

He said the officers who ‘murdered democracy’ and its institutions at the instance of the Congress party will be taken to task once the SAD formed a government in the state.

Meanwhile, the SAD complained to the State Election Commission (SEC) regarding alleged changing of wards of many voters in Batala and urged it to immediately take action.

In a complaint, SAD’s senior vice-president and spokesman Daljit Singh Cheema said it is forwarding a complaint in this regard from MLA Batala Lakhbir Singh Lodhinangal, in which he has mentioned how the ruling party is ‘trying to change’ wards of several hundred voters even after allotment of election symbol to the candidates.