Do it in Parliament, guarantee MSP: Tikait on PM’s farm laws repeal promise 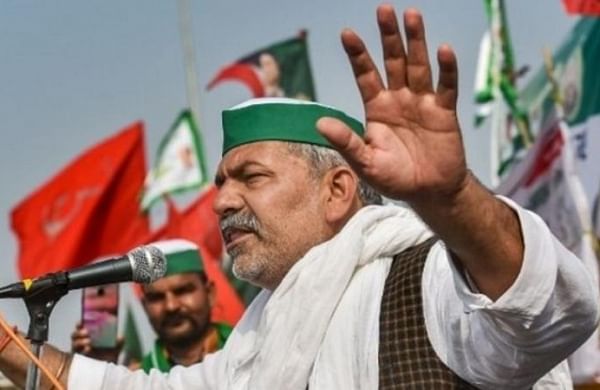 GHAZIABAD: Bharatiya Kisan Union (BKU) leader Rakesh Tikait on Friday said the ongoing anti-farm laws protest will be withdrawn only after the three contentious legislations are repealed in Parliament and legal guarantee on minimum support price (MSP) for crops made.

The influential farmer leader from western Uttar Pradesh also asked supporters not to engage in celebrations as their “struggle” will continue.

Tikait, who was in Maharashtra’s Palghar for an event on Friday, took to Twitter soon after Prime Minister Narendra Modi announced repealing the three farm laws, which were at the centre of the farmers’ protest since November 26 last year.

“The protest will not be withdrawn immediately, we will wait for the day when the farm laws are repealed in Parliament.

Farmers celebrate in New Delhi after PM #NarendraModi announced that the Centre has decided to repeal all three #FarmLaws.Express video | @parveennegi1. pic.twitter.com/aoeoXEI22R
— The New Indian Express (@NewIndianXpress) November 19, 2021
Along with MSP, the government should talk to farmers on other issues too,” Tikait tweeted in Hindi.

Addressing the nation on the occasion of Guru Nanak Jayanti, the prime minister said the three farm laws were for the benefit of farmers but “we couldn’t convince a section of farmers despite best efforts”.

The goal of the three farm laws was to empower farmers, especially small farmers, he said. At Palghar, Tikait said the prime minister must get the three laws repealed in Parliament and provide guarantee on MSP.

“The farmers are not going back home without this. Where we are today (Palghar), crops are not bought at MSP. The issue of MSP is one that affects entire country,” the BKU national spokesperson said.

He also asked people not to celebrate or distribute sweets now as the “struggle” has to continue.

“Today we have a meeting of our nine-member team of Samyukt Kisan Morcha scheduled at the Singhu border head office. The final decision will be taken there,” Tikait said.

The BKU leader said he would return to Delhi border later Friday night and would be at Ghazipur on Saturday.

In Palghar, Tikait met leaders of the Bhumi Sena – Advisi Kisan Parishad, who have been campaigning for land rights of tribal communities in the state.

Invoking Birsa Munda, the legendary tribal freedom fighter, Tikait lauded the Bhumisena – Adivasi Ekta Parishad for their support to the ongoing farmers’ protest and for fighting for the cause of tribals at village level.

Hundreds of farmers have been encamped at Delhi’s borders since November 26, 2020 demanding that the Farmers’ Produce Trade and Commerce (Promotion and Facilitation) Act, 2020, Farmers’ (Empowerment and Protection) Agreement on Price Assurance and Farm Services Act, 2020 and the Essential Commodities (Amendment) Act, 2020 be rolled back and a new law made to guarantee MSP for crops.

The government had so far maintained that the laws are pro-farmer but many from the farming community believed some changes in legislations would leave them at the mercy of corporations.