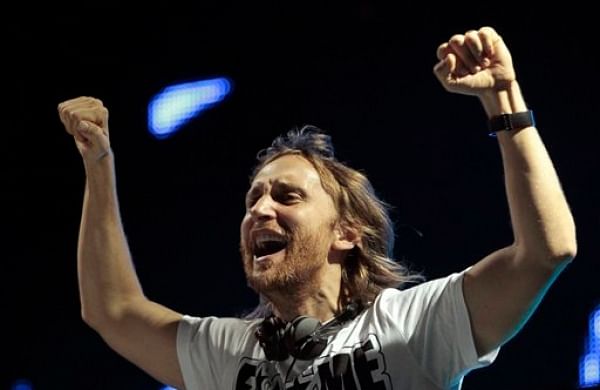 ABU DHABI: Internationally known DJ David Guetta has made a home for himself in the Persian Gulf.

The French DJ is a resident of the United Arab Emirates, where he has performed multiple times — the latest being on the helipad at the landmark Burj Al Arab hotel, and was one of the first artists invited to perform in Saudi Arabia when the kingdom opened its doors to tourists and began allowing concerts and entertainment. Guetta is performing in Saudi Arabia again on Sunday.

Guetta performed in Saudi Arabia’s Formula-E in 2018 and then a year later at the MDLBeast music festival in the capital of Riyadh. Marketed as the region’s biggest music event, the festival has drawn backlash for whitewashing Saudi Arabia’s image. Celebrities and influencers came under scrutiny for promoting a country widely accused of human rights abuses. Guetta is making his second appearance at the festival on Sunday.

Speaking to The Associated Press ahead of his Saudi gig, Guetta defended his participation.

“I don’t play for politicians, I play for people, and you know if I’m not able to, if I would need to be playing only in countries where I’m totally agreeing with the leaders,” he said from the Louvre Abu Dhabi where he was recording a set for a streaming New Year’s Eve show. that will be streaming on the night. If he were restricted to certain countries for political reasons, Guetta added, “I would probably stay home.”

MDLBeast Soundstorm’s first edition featured performances by J Balvin, Steve Aoki and Guetta among others, while the 2021 edition has the likes of Tiesto, Martin Garrix, Guetta, and DJ Snake on the ticket. In 2019, Instagram and TikTok were afloat with pictures of celebrities, models, and influencers posing in different parts of Saudi Arabia.

The posts attracted controversy and human rights groups scrutinized celebrities for marketing the country without speaking about its human rights record. Some celebrities later said they were paid to post about the event. Reports circulating on social media at the time claimed that some influencers and artists were paid high fees for the visits.

“I’m not saying what I’m saying because I was getting paid, I’m getting paid in any country, you know I can make money in Saudi, in America, in Europe, in Latin America,” Guetta said.

“I want to be able to play for the people wherever I go. But then, should I not go to China maybe? Should I not go to America because sometime(s), you know, I don’t always agree with certain wars that are happening?”

The music festival was one of the first events in Saudi Arabia where men and women were allowed to dance and mingle openly in public.

It was one of the most visible signs of change under crown prince Mohammed bin Salman in 2018. King Salman granted his son and heir, the crown prince, a free hand to usher in dramatic moves that have reshaped the country.

Allowing women to drive, bringing in musical concerts, opening movie theatres, easing restrictions on gender segregation, and reigning in the powers of the religious police have all been signature reforms of the young prince.

Because of the changes, “I was happy to be part of this,” Guetta said. “Of course there’s more things to be done to improve the country but I think they are opening and really going to the right direction.”

For example, he added, “Four years ago women couldn’t drive, and now they can come to a David Guetta concert and dance, you know it’s a huge evolution.”

Guetta says that people shouldn’t have to wait for a country to have a perfect record before wanting to show support.

“My position is, ok, if young people want me to be there, I want to be there for them,” he said.

With the sunlight dancing through the dome of the Louvre Abu Dhabi, and the cascading light and shadows creating an ethereal vibe on the waters around the museum, Guetta recorded his New Year’s Eve DJ-set on Wednesday, to no audience.

The show was recorded on a floating stage in the water of the Louvre Abu Dhabi and will be streamed on Guetta’s social media platforms at midnight on New Year’s Eve. The show features more than 500 light fixtures and will include 20-meter-high flames (about 65 feet) that will shoot up into the sky.

Guetta said he made Arabic-inspired music, especially for the event, including Arabic percussion and vocals.

“The site is one of the most beautiful things I’ve seen,” he said.