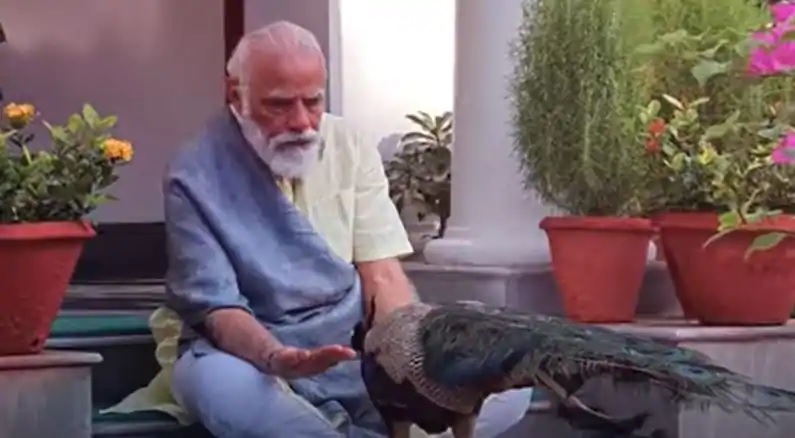 New Delhi: Yesterday, Prime Minister Narendra Modi posted a video from his Twitter handle, in which he is seen with Peacock. PM Modi is in his residence and the peacock is eating food from his hand. The peacock is also seen spreading his wings and making obsolescence at his residence. Along with this video, PM Modi has also posted a poem on peacock-

Since Prime Minister Narendra Modi’s tweet, it is common to discuss in the whole country whether there should not be uniform law for everyone. By sharing this video and photo on social media, people are demanding that why there should not be uniform law for everyone in the country? Actually, this question has arisen because in the year 2017, two peacocks were reared at the residence of former Bihar Chief Minister Lalu Prasad Yadav and at that time a case of violation of the Wildlife Act was made on him. Now that PM Modi is seen with a peacock in his residence, people are questioning whether the matter of Forest Animals Act should not be made on PM Modi? Questions abound? In such a situation, we want to tell the readers whether the matter of Wildlife Act is made on the PM or not? And what happened to Lalu Yadav three years ago.

Three years ago, two peacocks were reared at Lalu Yadav’s residence. At that time Lalu Prasad’s elder son Tej Pratap Yadav was the Minister of Forest and Environment of Bihar. On his orders, two peacocks were brought to Lalu Yadav’s residence from Sanjay Gandhi Biological Park in Patna. Experts say that this was done because Lalu Yadav’s health was very bad and there were many cases against him. Some astrologers asked him to live in the proximity of the peacock. But as soon as this news spread, a case of violation of the Forest Animals Act was made on him. Although Peacock was not recovered from his house, he was told that he had already been blown up due to the dispute.

No information on peacock frost at PM Modi’s residence

Prime Minister Narendra Modi’s residence is in Lutyens zone, where there is a lot of greenery. Experts say that peacocks have not been nursed at PM Modi’s residence, but instead they are seen wandering in this area. Peacocks are seen in every house in Lutyens area, they have not been raised. They are so familiar with this area that they roam around freely. If this situation is also in the residence of PM Modi, then there is no case of violation of the Forest Animals Act. Not only the peacock, many other animals are also found in abundance in the Lutyens zone, of which the monkey is prominent.

The peacock breeding center is in Lodhi Garden of Lutyens Zone

It is to be known that the Lutyens area was settled by the British. British architect Sir Edwin Lutyens also played an important role in settling this area, hence it is also called Lutyens Zone. The Lodhi garden in the Lutyens area is a breeding center for peacocks, which is why peacocks are in abundance here and are often seen in all habitats. There is a lot of greenery in the area and the atmosphere is quite clean and adorable. Many medicinal plants are also found here.

Laws raised on social media should be equal for everyone