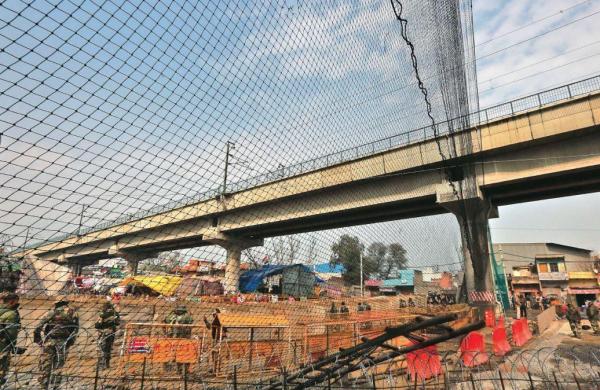 By Express News Service
NEW DELHI: In contrast to the Rajya Sabha taking up discussions on the motion of thanks to the address of President Ram Nath Kovind to the joint sitting of the Parliament, ruckus ruled Lok Sabha. The Opposition kept pressing for repealing of the contentious farm laws.

Lok Sabha Speaker Om Birla failed to convince Congress leader Adhir Ranjan Choudhary to allow the House to take up the discussion on the motion of thanks.

Birla continued to discuss ways to break the deadlock with the Opposition till late in the evening. The Opposition, particularly Congress, insisted on separate discussion on farm stir against the government wanting to club it with the motion of thanks. Opposition members crowded the well of the House, holding placards calling for scrapping of the “black laws”.

A few of them surrounded the Chair to gain camera footage. Incidentally, discussion of the motion of thanks in Rajya Sabha saw members from the treasury and Opposition benches arguing strongly in favour and against the farm laws.

While Lok Sabha was adjourned within a few minutes of resumption each hour after 4 pm, presiding officer Meenakshi Lekhi pressed ahead with the Zero Hour at 8.30 pm, asking members to raise important matters of their constituencies. Mostly the BJP members took part in the Zero Hour during which the Opposition kept shouting slogans.

Workers at a site set up barricades at Ghazipur border to stop farmers frommarching towards Delhi. (Photo | EPS)

The Rajya Sabha also saw the Opposition attack the government, saying that democracy is suppressed in the country. During motion of thanks on the President’s address, TMC MP Derek O’Brien said the government has failed to uphold the sanctity of Parliament.

​“Members had asked, as is procedure for the Bills to be referred to a select committee, but the government never did that. Political administration is the purview of the PM and home minister. This government has failed on many counts including handling the Covid-19 crisis and economy,” he said. Alleging that democracy was being suppressed, Congress MP Digvijaya Singh said: “We respect the mandate you have but the way in which dissent, which is the backbone of a democracy, is suppressed in our country is deplorable. The foisting of cases against farmers, journalists, activists and such need to stop.”

A group of former IFS officers has called upon the WTO to revisit the agreement on agriculture, stating that it’s biased in favour of the developed world. As much as other WTO Members were not even consulted, they said, the WTO agreement is characterised by democratic deficit and based on commercial realpolitik. “Obviously, you cannot have your cake and eat it too. The balance between market forces, food security and famers’ welfare is a delicate one”

BJP urges cultivators not to fall for international conspiracy against country

The BJP on Thursday called upon the farmers for talks, asking them not to fall for an “international conspiracy against India”. The party said that the country doesn’t need a certificate from foreigners.  “We wish to make an appeal to the farmers that they should talk to us. The government’s door is open for them. A few of the farmers’ unions who don’t like the farm laws can surely protest, but they should unite if there’s a conspiracy against the country,” it said.

Scores of widows of farmers on Thursday protested in Yavatmal to slam actor Kangana Ranaut for her “anti-farmers remarks”, burnt her effigy and demanded an unconditional apology from her. The protesters carrying banners and placards to proclaim ‘Yes, we are farmers but not terrorists’, referring to Kangana’s recent statement to malign the farmers protesting on Delhi borders and compare them to terrorists also burnt the Bollywood actor’s pictures.