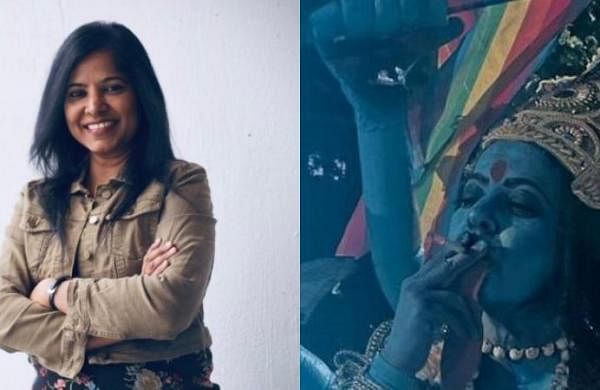 NEW DELHI: A poster for a documentary directed by filmmaker Leena Manimekalai has drawn flak on social media ‘for hurting religious sentiments’ with the depiction of Goddess Kaali.

The Madurai-born, Toronto-based filmmaker had earlier taken to Twitter to share a poster of her documentary film ‘Kaali’ which depicted a woman dressed in a costume portraying the goddess and smoking. A flag of the LGBT community is seen in the background.

The film was part of the “Rhythms of Cananda” segment at the Aga Khan Museum in Toronto, according to a tweet by the filmmaker.

The portrayal of Goddess Kaali in the poster did not go down well with a section of social media users who have demanded the poster be withdrawn.

Some even demanded strict action against her and the hashtag ‘#ArrestLeenaManimekal’ is trending on Twitter.

Some even demanded strict action against her.

After receiving flak on social media, Leena has restricted comments on her Instagram.

Several films and shows have in the past got into trouble for allegedly hurting religious sentiments. Anurag Basu’s ‘Ludo’ faced Twitterati’s ire for purportedly promoting ‘Hinduphobic’ content in the movie.

In 2021, Saif Ali Khan-starrer web series ‘Taandav’ raked up a row for allegedly creating a possibility of religious tension by portraying Hindu Gods in a bad light.