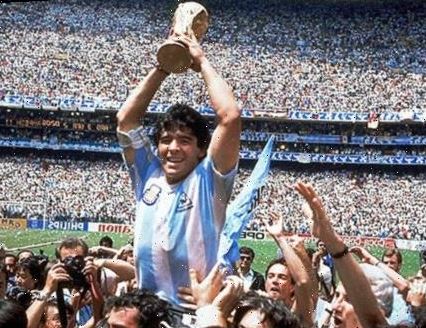 An American sports memorabilia expert has said the iconic ‘Hand of God’ Argentina shirt worn by Diego Maradona during his team’s controversial win over England at the 1986 World Cup quarter-final could be available for sale at $2 million. Would you fancy adding it to your collection?

Well, the shirt is currently on display at England’s National Football Museum in Manchester. The shirt was given to former England international Steve Hodge by Maradona himself after the quarter-final match in Mexico city.
Steve Hodge said he managed to exchange shirts with Diego Maradona while they were walking in the tunnel after the iconic clash in the quarter-final.

David Amerman of Goldin Auction in New Jersey believes the shirt could well fetch as much as $2million and that the owner was willing for a private sale.

“It’s very difficult to gauge (the value) with the “Hand Of God” jersey, but I know that the owner was looking for a $2 million private sale,” Amerman was quoted as saying Reuters. “It certainly could be a possibility, the values have jumped quite a bit in soccer.”

Amerman shed light on the increased demand for sports memorabilia, pointing out how a rookie football card of Maradona sold for $10,000 a few years ago could fetch $20,000 today.

“It’s very difficult to see how it would get to the two million dollar price, but I don’t see why an individual who had the money wouldn’t want something like that – you can’t really put a number on it. If you find the right person in the right place, it’s a realistic possibility,” Amerman said.