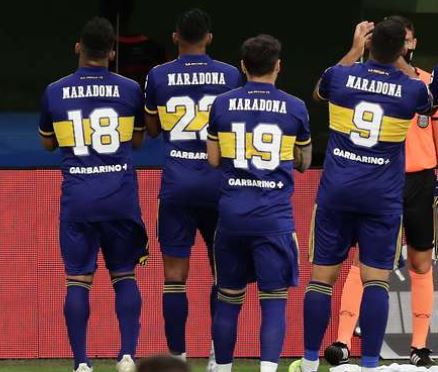 Sunday evening’s encounter between the two sides was always bound to be an emotional one and that’s what it proved to be. Maradona’s daughter, Dalma, was in attendance at La Bombonera

And there were beautiful scenes after Boca scored the opener in the 12th minute. Edwin Cardona broke the deadlock with a quite exquisite free-kick. Boca’s players, who were all wearing shirts with ‘Maradona’ on the back, immediately ran over to where Dalma was sitting.

They placed a Maradona shirt on the ground and gave an ovation in front of Dalma, who was overcome with emotion. It truly was a heartwarming moment and you can watch it below:

Cardona scored again later on in the half meaning the home side took a two-goal lead at the break. And, during half-time, all the lights inside the stadium were turned off, apart from the lights in Maradona’s VIP box.