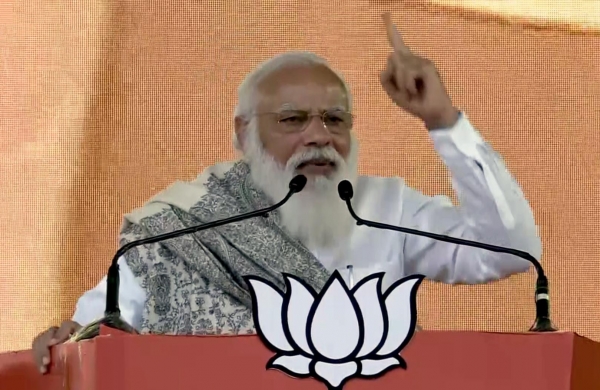 By ANI
PURBA MEDINIPUR: Asserting that some conspirators are trying to tarnish India’s image associated with tea and yoga, Prime Minister Narendra Modi on Sunday asked whether West Bengal Chief Minister Mamata Banerjee has spoken anything about these conspirators.

“There are some conspirators who are trying to destroy India’s image associated with tea and yoga–that was made famous by innumerable Indians across the world. There is a conspiracy to discredit and destroy the hard work of tea workers. Yoga, the legacy of India which was promoted by great men such as Maharishi Aurobindo and Vivekananda selflessly, is being attacked now,” Prime Minister Modi said at a public meeting in Haldia area of Purba Medinipur district in West Bengal.

“Has Didi spoken anything about these conspirators? The country will answer such conspiracies with full might. In Bengal, if you ask didi (Mamata Banerjee) about your rights, then she gets frustrated. She even gets annoyed if slogans of Bharat Mata Ki Jai are raised. But she does not get angry at people who speak against the country,” he said.

“All industries and infrastructure in Bengal today need transformation and modernisation. How many factories have been opened in the last 10 years? What happened to the steel plant? The region got opportunities and there was no competition. I want to put a question to the people of West Bengal: Your state was developed even during British rule. The state of infrastructure was stronger compared to the rest of the nation. Bengal has always shown the way to the nation. Why then, Bengal lost its pace of development?” he said.

Commenting upon the ruling Trinamool Congress (TMC), PM Modi said, “TMC has criminalised politics, institutionalised corruption and politicised administration and police. Bengal wants to ask TMC why are they admitting people in their party who shot at poor people and farmers in Nandigram?”

TMC is responsible for misgovernance, violence, corruption and attacks on beliefs, he said. People of Bengal are watching and soon Bengal is going to show the Ram Card to the TMC, he added.

PM Modi said in Bengali language that he “feels blessed to be able to visit the holy land of Midnapore.”