‘Did not forgive, will not forget’: CRPF on Pulwama terror attack anniversary 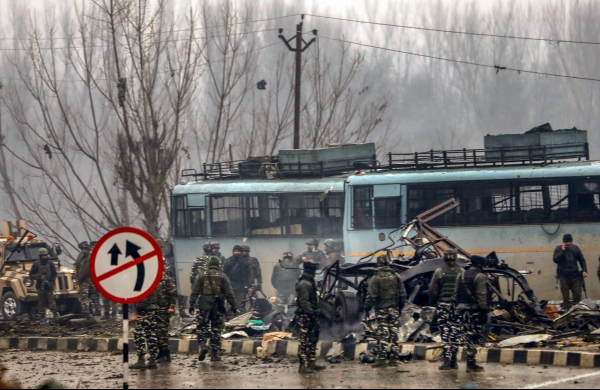 By PTI
NEW DELHI: The Central Reserve Police Force (CRPF) that lost 40 troopers in the 2019 Pulwama terror attack said on Sunday that the country “did not forgive” and “will not forget” the supreme sacrifice made by the personnel.

A wreath-laying ceremony was held at CRPF camp in Lethpora in Jammu and Kashmir to mark the second anniversary of the deadly attack.

Senior officers of the paramilitary based at its headquarters in Delhi participated in the event in the virtual mode, CRPF spokesperson deputy inspector general (DIG) Moses Dhinakaran said.

“Did not Forgive, will not Forget: Salute to our brothers who made the supreme sacrifice for the nation in #PulwamaAttack.

“Indebted, we stand with the families of our valiant Bravehearts,” the force said in a Twitter post.

READ| ‘No Indian can forget this day’: PM pays tributes to Pulwama martyrs

Soon after the Pulwama attack, the Indian Air Force had carried out an airstrike in Pakistan’s Balakot on February 26, 2019, targeting terrorist camps.

CRPF Director General A P Maheshwari also unveiled a video book dedicated to the 40 personnel killed in the line of duty.

“We have inherited bravery which flows like blood in our veins,” he was quoted as saying by the spokesperson.

“The video book has a content of 80 episodes and 300 minutes. A copy of the book will also be sent to the families of each of the personnel killed in the Pulwama suicide bombing attack,” Dhinakaran said.

A CRPF bus in the fifth position of a 78-vehicle convoy was targeted by a Jaish-e-Mohammad (JeM) suicide bomber who detonated his explosives-laden SUV near it on the Jammu-Srinagar highway in Pulwama on February 14, 2019.

The convoy was ferrying over 2,500 personnel and all 39 in the ill-fated bus and a sub-officer stationed on the ground, as part of a road sanitisation party, were killed in the blast.

CRPF Assistant Sub Inspector (ASI) Mohan Lal, 50, who had “chased and fired” at the explosives-laden car, was named for the highest police medal for bravery, the President’s Police Medal for Gallantry (PPMG), this Republic Day.

In Jammu, CRPF personnel at the Bantalab campus also paid tributes to the 40 troopers of the force and a ‘vatika’ (garden) made to honour them was inaugurated, a spokesperson of the paramilitary force said.

The garden has been named after Head Constable Naseer Ahmad and it is near the ‘Shaheed Smarak’, he said Ahmed was posted in 76th battalion and was deployed for protection duty of the convoy.

He was killed in the attack.

The garden was inaugurated by Ahmed’s wife Shazia Kousher in the presence of Inspector General of CRPF, Jammu Sector, P S Ranpise and other senior officers, the spokesperson said.

Students and youth also took to streets to pay tributes to the CRPF personnel who were killed in Pulwama.

The around 3.25 lakh-personnel-strong force is the world’s largest paramilitary with about 65 battalions or about 70,000 personnel deployed in the Kashmir Valley for undertaking counter-terrorism operations and rendering law and order duties.

As per official data, a total of 2,224 CRPF personnel have been killed in action till now.

The force was raised in 1939 as the Crown Representative’s Police (CRP) during the British Raj and was re-named the Central Reserve Police Force a decade later in 1949.