Dhawan did not review after being out against Hyderabad, Yuvraj Singh trolled 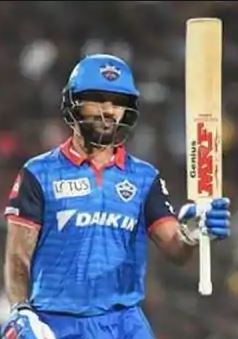 In the qualifier two match played on Sunday in IPL 2020, Delhi Capitals (DC) made the final entry by defeating Sunrisers Hyderabad by 17 runs. Shikhar Dhawan, who was in good form in the tournament, batted brilliantly for Delhi. He scored 78 runs off 50 balls with the help of six fours and two sixes. On the third ball of the 19th over, Sandeep Sharma dismissed Dhawan lbw. Dhawan returned straight to the pavilion after the umpire was declared LBW and did not take a review.

Dhawan could have survived if he had taken a review, knowing in replays that the ball was not hitting the stumps. He was trolled by Yuvraj Singh, the former cricketer of Team India. At the end of Delhi’s innings, Yuvraj tweeted and said, “The bowlers made a great comeback in the last two overs. There was not a single boundary. Natarajan and Sandeep Sharma deserve praise. Kama did the work in a pressure match. Man in Farm Shikhar Dhawan, but the name is Jatt ji. What brother of DRS. You will be forgotten forever.

Shikhar Dhawan’s half-century led Delhi to a big score of 189 for three in the first 20 overs and then later bowled Hyderabad to eight with the superb bowling of Cagiso Rabada (4/29) and Marcus Stoinis (3/26). Won 17 runs by stopping for 178 runs on the wicket. Marcus Stoinis, who came in to open the innings with Dhawan, batted in a wobbly style. Stoinis scored 38 runs off 27 balls. He hit five fours and a six. Sharmon Hetmyer remained unbeaten on 42 off 22 balls.