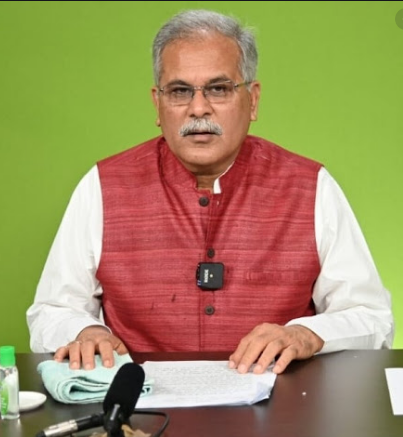 Bhupesh Baghel has said that Dharsa Vikas Yojana will soon be started in the state for convenient access to the farmers to their fields. He said that a new avenue of income was opened for the farmers by linking the Chief Minister’s Tree Plantation Scheme with the Rajiv Gandhi Kisan Nyay Yojana. In a virtual program organized at his residence office in the capital Raipur on Wednesday, the Chief Minister inaugurated 1430 works costing about Rs 565 crore in Balodabazar-Bhatapara and Mahasamund districts and performed Bhoomi Pujan.
The Chief Minister said that even though the construction work was affected a little at the time of lockdown, but more important work than that, we continued with full force. Through various schemes of the state government, work was done with full force to save the poor, farmers, laborers and villagers from hunger, unemployment and worry about the future. Last year also during the lockdown, arrangements were made for free rice to the poor. This year, arrangements for free rice for the months of May and June have already been made, now rice for five months will be given free of cost from July to November. Additional rice will also be distributed to all ration card holders equivalent to Pradhan Mantri Garib Kalyan Yojana. The Chief Minister said that the development works which were affected by the first and second wave of Corona will now be completed with full speed. It has started after the corona wave weakened.
The Chief Minister said that despite the adverse circumstances of the Corona period, the State Government is working in the interest of all sections including the poor, farmers, laborers and tribals. Rajiv Gandhi Kisan Nyay Yojana worked to remove the despair of the farmers. The installments of Rajiv Gandhi Kisan Nyay Yojana continued to reach the accounts of the farmers whenever they needed them in the agricultural works. Last year, an amount of Rs 5628 crore was sent directly to the accounts of 19 lakh farmers in four installments under this scheme. Now expanding the scope of this scheme, along with paddy and sugarcane, tur, maize, kodo, kutki, soybean, pulses and oilseeds have also been included.
Mr. Baghel said that Godhan Nyay Yojana has given great support to the farmers and livestock farmers in the time of Corona crisis. So far, more than Rs 95 crore has been paid to the dung vendors against the purchase of cow dung. During the last lockdown, Chhattisgarh has been the top state in the country in providing employment in MNREGA works. This year also, in MNREGA, 25 percent of the target of the year has been completed in two months.