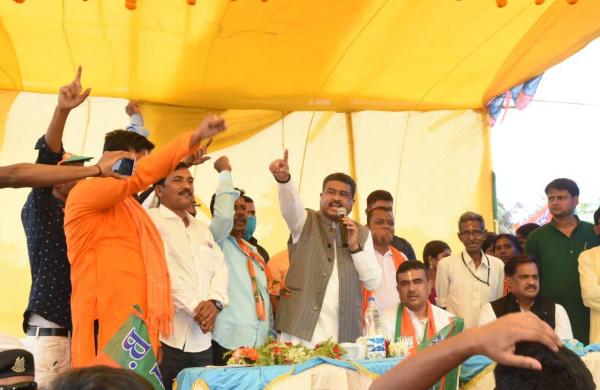 By ANI
NANDIGRAM: Minutes after an alleged clash between Bharatiya Janata Party and Trinamool Congress workers, Union Minister and senior BJP leader Dharmendra Pradhan on Thursday lashed out against the Mamata Banerjee government and stated that democracy is being murdered from where the Chief Minister is herself contesting.

“If she wants to contest why not with democratic ways. Since morning, when Suvendu Adhikari started his padayatra, due to fear of losing to him and his popularity they are attacking us. On Sonachura Chowk, our young worker was attacked,” Pradhan said soon after a clash broke out allegedly between BJP and TMC workers during Suvendu Adhikar’s rally in the Nandigram constituency.

Pradhan stated that two incidents of violence took place on Thursday. “In the morning at Kalicharanpur, crude bombs were hurled and injured few. I saw the injured Yuva Morcha worker while on way to campaigning,” he said after the visit to Reapara Rural Hospital.

“There is yet another report coming of an attack on Adhikari. This is very serious. In a democracy, if the local police works in connivance with the TMC what will happen. I urge the Election Commission to intervene,” Pradhan added.

The Minister said that BJP will request the Election Commission to have more paramilitary personnel deputed in Nandigram.

“This is a constituency going through a sensitive phase. To create fear in minds of people. Our worker is in serious condition and I have been told that even in front of the hospital there are TMC’s goons. Since morning, such incidents are taking place,” Pradhan added.

The clash during Adhikari’s campaigning resulted in an injury to a BJP worker. Pradhan Pradhan changed his plan of campaigning in the constituency and instead accompanied the injured worker to the hospital.

Pradhan who arrived at Sonachura, a village in the Nandigram Assembly constituency, cut short his speech to visit the injured BJP worker, Purn Patra, at the hospital.

Nandigram is a seat where Chief Minister Mamata Banerjee and her former close aide Suvendu Adhikari are locked in a high voltage battle.

On March 10, the Chief Minister had alleged that she was pushed by a few unidentified people during her election campaigning. Banerjee sustained “severe bone injuries” on her left foot and ankle as well as bruises and injuries on her shoulder, forearm and neck, according to the report of her initial medical examination. She was discharged from the hospital on March 12.

Elections to the 294-member state Assembly will be held in eight phases starting from March 27 with the final round of voting taking place on April 29. The counting of votes will take place on May 2. (ANI)