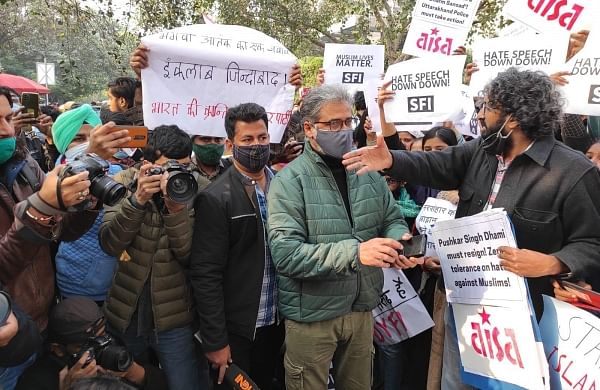 NEW DELHI: Thousands of people, owing allegiance to the CPI(ML) Liberation, the AISA, and the AICCTU, on Monday staged a demonstration outside the Uttarakhand Bhawan, here, against the hate speech made recently against the people of the minority community.

The protesters demanded the arrest of the people, who were allegedly involved in making inflammatory speeches and instigating the people to target the minority people, and the immediate resignation of the Uttarakhand chief minister.

Dipankar Bhattacharya, general secretary of the Communist Party of India (Marxist-Leninist) Liberation, while addressing the protesters, said that those far-right individuals and organizations, backed by BJP, are playing communal card to divide the nation.

Equating the Dharma-Sansad- that was organized from December 17 to 20 in Utarrakhand with Nazi Germany’s ‘Final Solution’, Bhattacharya said: ” The Uttarakhand hate speech assembly that called upon the people for the genocide of Muslim community is similar to the act of Nazi German’s  ‘Final Solution’.

He underscored the need for the democratic forces to come together to ensure that fascist forces are thrown out of power.

He said that from Haridwar to Delhi and Raipur to Udupi, the Sangh- brigade is bent upon instigating communal violence ahead of the coming state elections. He made a call to the people of the country to foil the nefarious designs.

The Left-associated people protesting outside the Uttarakhand Bhawan also sought the resignation of Uttarakhand CM taking moral responsibility for what happened at the Dharma-Sansad against a particular community.

N Sai Balaji-president of the All India Students Association (AISA) demanded the immediate arrest of all the hate-mongers. He lambasted the BJP government for maintaining stony silence over such inflammatory calls against a particular community at an assembly organized as Dharma-Sansad.