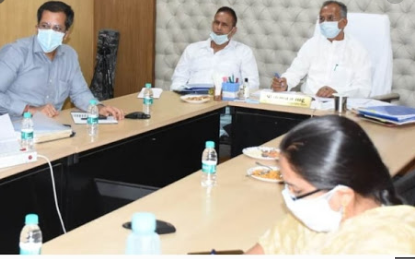 State’s Excise and Industry Minister and District In-charge Minister Shri Kawasi Lakhma took a meeting of Jeevandeep Committee under District Hospital on this afternoon, in which he gave approval for various works. During this, the Minister in-charge gave instructions in the meeting to further improve the health facilities during the Corona period and provide basic facilities as per the requirement.

Civil Surgeon cum Chief Hospital Superintendent Dr. Murthy, while presenting the compliance report of the agenda of the previous meeting, told that in the meeting of the general meeting of the committee held in the Collectorate hall at 1.30 pm, it was informed that the installation of tiles in the store room of the district hospital, the maintenance of kidney disease patients. Discussions were held on the demands for providing dialysis facilities, providing CT scan and MRI test facilities to patients in the district hospital, arranging radiologists, construction of a pucca drain to drain the hospital’s waste water. He said that a proposal for the above requirements has been prepared and sent to the government. Apart from this, the information about the completion of the appointment of Oxygen Plant Attendant after the previous proposal was given in the meeting. Along with this, after sending the estimate for construction of new multi-storey building in place of dilapidated buildings of District Hospital building, information about various demands like sending detailed estimate to CGMSC, appointment of ward boy and Aaya was also given in the meeting.
In the meeting, Cabinet Minister Mr. Lakhma raised the demands like installation of new ACs in blood bank, vehicle parking, flooring and shed construction work, replacement of dilapidated doors of toilets with new fiber doors, purchase of new Xerox machines, expansion in intercom etc. Approved to complete from the fund. Apart from this, after discussing various agendas, the minister in-charge gave instructions to the officers to provide necessary facilities. On this occasion, Sihawa MLA Dr. Lakshmi Dhruva, Dhamtari MLA Smt. Ranjana Sahu, Mayor Shri Vijay Devangan, District Panchayat President Smt. Kanti Sonwani along with Collector Shri Jaiprakash Maurya, SP Shri BP Rajbhanu, CEO of District Panchayat. Besides Shri Mayank Chaturvedi, senior citizen Shri Sharad Lohana, members of Jeevandeep Committee and officials of health and related departments were present.