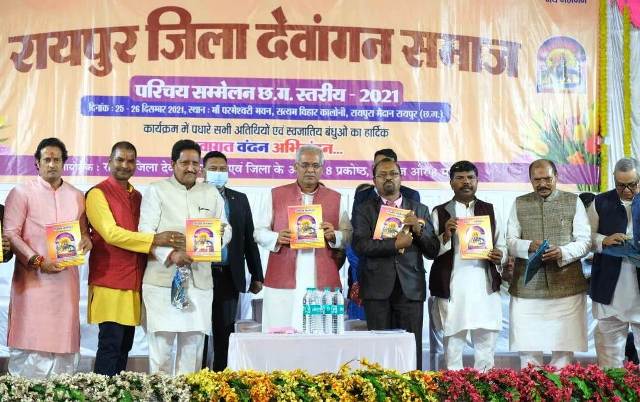 Chief Minister Shri Bhupesh Baghel attended the Chhattisgarh level Devangan youth-girl introduction conference organized at Maa Parmeshwari Bhawan, Raipur, Raipur this evening. Chief Minister Bhupesh Baghel announced an amount of Rs 25 lakh for the construction of hostel, meeting hall and marriage hall of Devangan society. Mr. Baghel said that a plot of 1 acre would also be made available to the society soon to build a social building at Gudhiyari in the capital city of Raipur. Chief Minister Bhupesh Baghel started the program by offering prayers to the deity Goddess Parmeshwari, the deity of Devangan society. Chief Minister Bhupesh Baghel, while congratulating the members of the society including all the organizers for organizing the youth-girl introduction conference of Devangan society, said that earlier the senior people of the society used to decide their relationship after seeing the young men and women in the social events like fair and shed. . But in today’s changed era where people live in remote places for jobs and employment, due to which there is no contact between the people of the society. In such a situation, such youth-girl conferences are proving to be very helpful for establishing marriage relations. Chief Minister Bhupesh Baghel released the youth-girl introduction conference booklet of Devangan society on this occasion. The Chief Minister said that Devangan society is a respected and professional society, which works by making and weaving clothes. Devangan society is also called by other societies as Mahajan, this title has been achieved by the forefathers of the society by their hard work and work. Devangan society has a major role in providing Chhattisgarhi clothing and apparel. This society is continuously doing the work of farming along with making cocoons and cloths. Our government is continuously working for the progress of Chhattisgarh. As soon as the government was formed, it was decided to waive the loans of the farmers, along with the purchase of paddy in the support price, input subsidy is being given under the Rajiv Gandhi Kisan Nyay Yojana, due to this there has been a steady increase in the income of the farmers. The Chief Minister said that the number of farmers has increased as a result of continuous encouragement to agriculture by his government. Simultaneously, the area under agriculture has also increased. Earlier, where 17 lakh farmers were registered in the state and farming was done in 22 lakh hectares, today 22 and a half lakh farmers are registered and more than 28 lakh hectares of land is under cultivation. This means that farming in Chhattisgarh has now become profitable. Those farmers who had given up farming are now again returning to agricultural work and those living in the city are also going back to the village. The Chief Minister said that the market is glowing due to the money going into the pockets of the farmers, which is also benefiting the businessmen of Devangan society. Earlier, in festivals like Diwali, where farmers used to buy clothes etc. by taking loans, now they are buying cash and wearing branded clothes. The standard of living has improved in Chhattisgarh. The dream of economic prosperity which our forefathers had seen is now coming true. In the last 3 years, despite Corona, we were concerned about the education health and economic progress of people along with survival. In Swami Atmanand English Medium School, children from rural environment and from middle and lower class families are getting education in English, it will definitely benefit in the coming time. Chief Minister Bhupesh Baghel said that drinking alcohol is a social evil, which can be removed only by bringing awareness in the society. He appealed to the society to create an environment to eradicate this social evil. In the conference, Kumari Dakshita Devangan and Mr. Manharan Devangan presented his sketch, sketch wall painting to the Chief Minister. In the program, the Chief Minister honored the people of Devangan society who made remarkable contribution to the society. On this occasion Parliamentary Secretary Shri Vikas Upadhyay, MLA Shri Ramkumar Yadav, Chairman of Chhattisgarh Mineral Development Corporation Shri Girish Devangan, Chairman of Civil Supplies Corporation Shri Ram Gopal Agarwal, Mayor Dhamtari Shri Vijay Devangan, former MLA Shri Motilal Devangan, State President of Devangan Samaj Shri Pradeep Devangan, President of Raipur District Devangan Samaj Ishwar Lal Devangan, Shri Dilip Sarangi, women’s cell of Devangan society, youth cell, head of society and many other social workers were present. Like this:Like Loading… Continue Reading

Beneficiaries identified in Mukhya Mantri Jan-Seva Abhiyan will start getting benefits of schemes from next month: CM Shri Chouhan