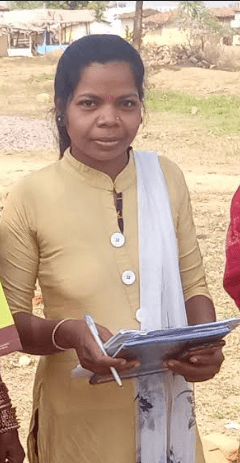 There are many disabled people in the world who have made their weakness their strength. He never lost his courage and reached the heights of success and set a role model for others. Giving similar example, Ms. Thagan Markam, a resident of village Mundtola development block, Chhuikhadan district, Rajnandgaon, never allowed disability to become a hindrance in life and changed her fortune with hard work. The fact is that by becoming a mate in MNREGA (Mahatma Gandhi National Rural Employment Guarantee Act) in the Divyang Ms. Thagan Markam Mundatola Gram Panchayat, not only increased the participation of women in the schemes, but she herself became empowered and made a wonderful new beginning of her life. Ms. Thagan Markam is very happy with her work and says that disability cannot be a hindrance to success, if one wishes to. It is worth mentioning that after the passing of the parents, she has become a role model for everyone, who has the courage to do something for the village through MNREGA, considering the elders of the village as her guardian. Divyang and successfully discharging the role of female mate in village Mundatola since January 2021. After becoming a mate, he has got a new pond constructed in the village, land reclamation work in the field of Shri Vinay Dhurve and construction of a well in the field of Shri Shyamlal. Due to their activism, the participation of women workers in open works under the scheme has increased to 50 percent. In Mahatma Gandhi NREGA, in the year 2019-20, where the percentage of man-day employment generated by women was 42.36, it increased to 50.86 percent in the year 2020-21. Ms. Thugan, popular among the women in the village for her simple behavior, has maintained 50 percent participation of women in the current financial year with her perseverance. Till the end of November, 2021, out of the total 615 workers employed in the village, 310 women workers have got 6802 man-days of employment. MNREGA Mate Ms. Thagan’s past has been full of hard work and struggles. The journey from MNREGA laborer to MNREGA mate was not easy for him. She was left alone in the family after the death of her parents and the marriage of her sisters. Being handicapped with one leg, he used to get work from the panchayat according to his capacity. Regarding her past struggles, Ms. Thagan Markam says that she has about one and a half acres of ancestral agricultural land, which she gives to Adhia for agricultural work. Their economic condition was not good due to limited means of subsistence. In such a situation, village employment assistant Ms. Sarita Dhurve came to him as a new dawn (new dawn) and advised him to work as a female mate in Mahatma Gandhi NREGA. It is only because of his advice that Ms. Thagan is able to discharge her duties respectfully as MNREGA mate in the village. With the remuneration received from MGNREGA, she has bought a sewing machine for herself, which she is using for her livelihood prosperity. Like this:Like Loading… Continue Reading