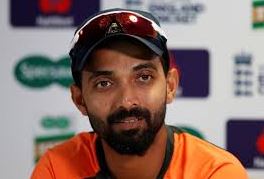 Indian Test team vice-captain Ajinkya Rahane believes that despite the absence of fast bowler Ishant Sharma, the bowling attack of the team is strong and the bowlers of the team are able to perform better against Australia. The first match of the four-Test series between India and Australia is to be held on 17 December.

It is a day-night Test match which will be played with pink ball. For this tour, veteran fast bowler Ishant has not been included in the team due to injury but the vice-captain believes that despite his absence in the team, Team India’s bowling attack is strong.

Rahane said, “We have a strong bowling attack. We will miss Ishant as he is the senior fast bowler of the team but bowlers like Umesh Yadav, Navdeep Saini, Mohammad Siraj, Jaspreet Bumrah and Mohammed Shami are all in the team and all these bowlers are experienced and know how to bowl under these conditions. is. It is important for us to have balance and partnership in bowling. “

He said, “All bowlers are better. We have not taken any decision regarding which bowlers to include in the last XI. This will be discussed on Wednesday. Now there is one practice session left before the match. All the players in the team are equally talented. The player who gets the chance can win the match, it is just a matter of trusting the players. “

India won the Test series from Australia in 2018, but for this time David Warner and Steven Smith can pose a challenge. Although the Australian team is upset with the player’s injury and his opener Warner has been ruled out of the first Test, while Smith also withdrew from the practice session on Tuesday due to a swelling in his back. The Indian team can take advantage of this.