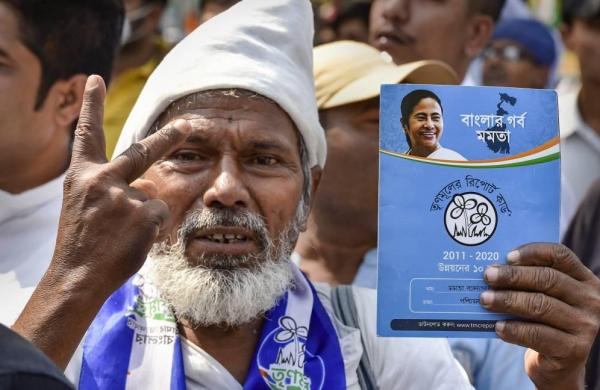 By PTI
KOLKATA: The TMC said on Sunday it disagrees with the Election Commission’s observation that there was no pre-meditated attack on West Bengal Chief Minister Mamata Banerjee in Nandigram and demanded a high- level probe into the incident, insisting the inquiry by election observers lacks credibility.

However, party spokesperson Sougata Roy expressed satisfaction that the EC agreed that there were security lapses and took action against some officials.

Earlier Sunday, the Election Commission concurred with the reports sent by its two special poll observers and the state government that there was no pre-meditated attack on the TMC supremo on Wednesday, indicating that her injuries were the result of a security lapse.

The poll panel ordered that Director (Security) Vivek Sahay, an IPS officer, be removed from his post and placed under suspension immediately.

The Superintendent of Police of Purba Medinipur Pravin Prakash was also suspended, while District Magistrate Vibhu Goel was transferred.

“We disagree with the EC’s observation based on the report of special election observers that there was no attack on Chief Minister Mamata Banerjee. The report of the election observers lacks credibility and fails to inspire confidence. We reiterate our demand for a high-level probe into the incident,” Roy said.

Reacting to the removal of officials by the EC over security lapses, Roy said, “It is good that at least they have accepted that there were security lapses.

“It is a welcome move that the EC has removed the officials over security lapses. At least they have taken some action. We had raised this question as to how there were lapses in the security of the chief minister,” he said.

After reviewing the reports sent by its two special poll observers–Ajay Naik and Vivek Dube– and the state government, the EC concluded that Banerjee sustained injuries prima facie due to a lapse on the part of her security in- charge, sources in the poll panel said.

While Banerjee was using an ordinary vehicle, her director of security Vivek Sahay was in a bulletproof car when the incident took place.

Also, no approval was taken from the returning officer of the area where the incident took place, the sources said.

Due to this, poll officials could not deploy videographers or flying squads, they added.