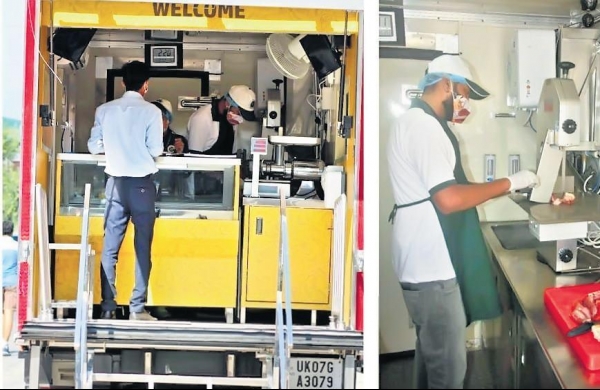 Express News Service
UTTARAKHAND:  Rekha Devi, a resident of Chakrata in Uttarakhand, had little hope when officials from the Uttarakhand State Sheep Goat Farmers Co-operative Federation approached her to be part of ‘BAKRAW’ — a government initiative to home-deliver meat products from the state’s hilly areas and boost the economy amid the Covid-19 pandemic.

Devi, however, had reluctantly signed up for the project, which has now turned out to be the best decision of her life. Devi, a goat rearer, supplies the animals to the federation, which then delivers their meat to the doorstep of customers under the initiative. Launched in October last year, the Himalayan goat meat service had received more than 50 orders within the first two days.

The brainchild of Meenakshi Sundaram, secretary of the animal husbandry in the Uttarakhand government, the initiative aims to provide a market for sheep/goat products and streamline income flow for the farmers. “We aim to transform the unorganised sheep and goat sector of Uttarakhand into a self-sustaining organised cooperative sector, resulting in substantial improvement in the livelihood of the farmers making them ‘Aatmanirbhar,” says Sundaram.

Till date, more than 13,596 farmers from various parts of 13 districts of Uttarakhand have enrolled themselves, of them 7,219 are women. According to officials, at present, over 1,500 goat rearers from six blocks of four districts — Rudraprayag, Almora, Bageshwar and Pauri — have started getting benefits from the scheme. Traditionally, the Himalayan goats rearing in the state is done by the women associated with cooperative societies.

The officials said the Himalayan goat meat is a world-class farm to fork modern meat hygiene systems by the Uttarakhand farmers’ cooperative federation. The branding of high-quality meat will consolidate the livelihood of the farmers and the state economy. “Now, we sell our products to the Uttarakhand Sheep and Wool Development Board directly on a higher rate than we used to get from local butchers,” says Sameena Qureshi, a goat rearer from Chakrata in Dehradun.

Avinash Anand, chief executive officer of the board, says: “We thought of creating a brand for our farmers and providing them with a big market. The scheme is a holistic approach to support the farmers and train them in breeding, nutrition, vaccination and deworming.” During a rally in Udham Singh Nagar district in February 2019, Prime Minister Narendra Modi had announced the release of Rs 100 crore funds for Uttarakhand, of which Rs 25 crore was given to the sheep and goat rearing project. According to Anand, more than 70% of the state population are non-vegetarian.

The state has many education hubs and renowned tourist places that provide a huge opportunity for goat rearers to expand their business. Shirish Shirsat, COO of the project, says: “This project is for a long run. The results will come with time and eventually change the quality of goat and sheep rearing.” Shirsat says earlier a goat would gain weight up to 70 grams per day. Now, it has gone up to 130-150 grams per day. “This shortened the period for the rearers to sell their products,” he adds.