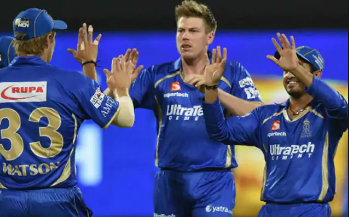 Rajasthan Royals captained by Steve Smith kicked off the IPL 2020 edition with a bang. First, the Royals upset the mighty Chennai Super Kings by 16 runs in their maiden match at the Sharjah Cricket Stadium played on September 22.

Then the team chased down the mammoth target of 224 set by Kings XI Punjab at the same venue thanks to batting heroics exhibited by Rahul Tewatia and Sanju Samson.

The franchise extremely happy with their two out of two wins in IPL expressed their excitement in a tweet on September 29.

On Friday, Australian all-rounder Marcus Stoinis shone with both bat and ball as Delhi Capitals regained the top spot in the IPL standings with a comprehensive 46-run win over Rajasthan Royals here. Delhi posted 184 for eight, the lowest first innings total at the ground this season, riding on Shimron Hetmyer’s 24-ball 45 and 39 off 30 balls from Stoinis.

Kagiso Rabada (3/35) then picked three wickets, while Stoinis (2/17), Ravichandran Ashwin (2/22) snared two wickets each as Delhi dismissed Rajasthan Royals for 138 in 19.4 overs to secure their fifth win in six matches. Royals were never convincing in the chase.

This was Royals’ fourth consecutive defeat in the tournament and the official Twitter handle of Delhi Capitals reminded the team about the same in a cheeky dig on the microblogging site.