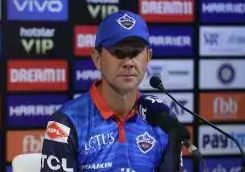 After being defeated by Mumbai Indians by five wickets in the title match of the IPL, Delhi Capitals head coach Ricky Ponting said that he was proud of the way the team played during the tournament. Delhi on Tuesday, batting first in the title match of IPL-13, scored 156 runs for seven wickets in 20 overs, but this score was not too much to defeat Mumbai. Mumbai won the title by scoring 157 runs for five wickets in 18.4 overs and for the first time playing the final Delhi’s dream of becoming the new IPL champion could not be realized.

Ponting said – Mumbai Indians is a great team. They have defeated us four times. It was disappointing to see his team lose as a coach but I am very proud of the way our team players played, “he said.” Shreyas Iyer is a great player, captain and person. They have certainly developed a lot in the last 12 months. Hopefully, we will work together in future also. We had barely three and a half weeks to prepare before the tournament, so our preparation could not be very much.

Ponting said – This tour was really challenging for us. I was apprehensive about leaving Australia and coming here but the organizers did a very good job. We had a team of young players for the tournament and I am very proud of them.