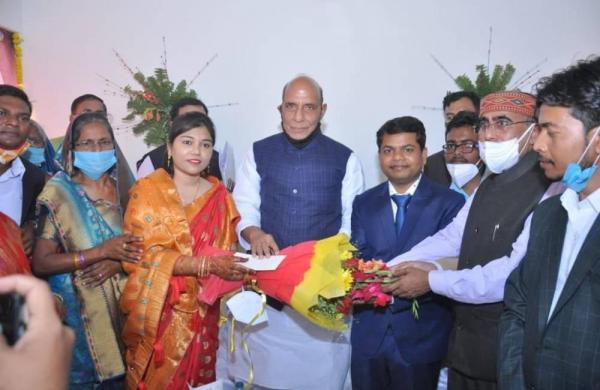 Express News Service
LUCKNOW: It has been two decades and yet Defence Minister Rajnath Singh has never lagged in fulfilling his responsibilities towards his adopted son Brijendra Kumar.

The culmination of this came on Saturday when the Raksha Mantri suddenly reached Ghazipur to shower his blessing on Brijendra, now a doctor, and his bride at their wedding taking all by surprise.

“What a pleasant surprise, possibly the biggest of my life so far. I am very happy since it was unexpected as he is always so busy,” said the groom.

The Defence Minister, who had painstakingly kept his visit a secret from the family to surprise them, reached the venue at Madaripur locality of Ghazipur in eastern UP and blessed the groom by placing a ’tilak’ on his forehead.

Rajnath Singh had adopted Birjendra in the year 2000. Then he was the Chief Minister of Uttar Pradesh and Brijendra had topped the state board examination for class 8 students.

Rajnath Singh had called him up to congratulate him and enquired after his family. This was when he came to know that Brijendra was a dalit and had lost his father at a tender age.

After the death of his father Jagannath, a resident of Virpur Khilwa in Azamgarh, Brijendra’s mother Sushila had gone to stay with her parents along with her three small sons — Vipin and Manjesh being the two others — at Madaripur in Ghazipur.

On coming to know of this, Rajnath Singh adopted Brijendra, who was a bright student.

“I took on the responsibility of his education when I was CM of UP. I’m happy that he has become a doctor today,” said Rajnath Singh while talking to media persons in Ghazipur.

At present, Brijendra is posted at Gosainganj CHC in Ayodhya.

Brijendra’s second brother Vipin is preparing for civil services by staying in Delhi and the youngest Manjesh is pursuing a B.ED course.

Dr Brijendra’s bride Krtika is a post graduate in English, who has done her B.Ed from Kolkata University.

“I did not know that my son-in-law is the adopted son of Raksha Mantriji. It all dawned upon me today only when he came to bless the couple himself. It is unbelievable for me,” said the bride’s father Premchandra.

Dr Brijendra said he met Rajnath Singh on February 14 to invite him for the marriage. “He had promised to come but I had kept my fingers crossed given his busy schedule and responsibilities,” he said.

Dr Brijendra said the Defence Minister was always there for him.

“Whenever, there was a problem, I was free to call him up directly. Then he would solve our problems on priority either by sending someone or whichever way,” added Dr Brjendra.

“Just because of him my son has been able to achieve whatever he could,” underlined Sushila Devi.