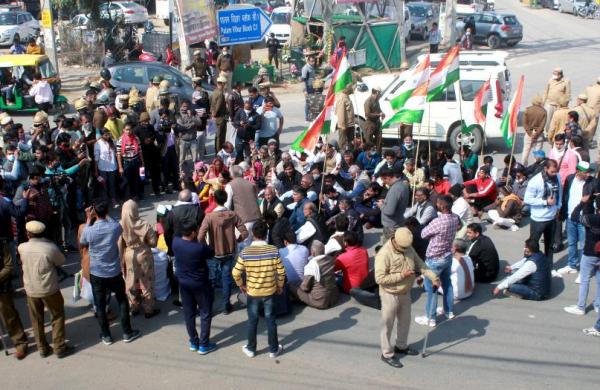 By PTI
NEW DELHI: Senior farmer leader Darshan Pal on Saturday said the decision by BKU leader Rakesh Tikait to not hold ‘chakka jam’ in Uttar Pradesh and Uttarakhand was taken in “a hasty manner” and it would have been better had he first discussed his plan with the Samkyukta Kisan Morcha.

Earlier this week, the Morcha, an umbrella body of farmer unions leading the protests at three Delhi border points — Singhu, Tikri and Ghazipur — against a trio of farm laws for over 70 days, had announced a nationwide ‘chakka jam’ on February 6.

On Friday, Tikait told reporters that there would be no road blockade in Uttar Pradesh and Uttarakhand on Saturday. A senior farmer leader, who didn’t wish to be named, said that the BKU leader’s “sudden decision” surprised some leaders of the SKM.

“It would have been better if Rakesh Tikait had talked and discussed about his proposal of not having chakka jam in UP and Uttarakhand with us before telling it to the media. He, of course, did discuss it with the SKM later and it was a joint thing,” Pal told reporters at a press conference at the Singhu border.

“So basically what we are trying to say here is that he announced it in a hasty manner. Nothing else,” he added.

However, Pal cleared that everything is fine within the SKM and people shouldn’t assume that there are any differences between the leaders. Later in the evening, the SKM issued a statement, claiming that ‘chakka jam’ was also held in Uttar Pradesh and Uttarakhand on Saturday. “Chakka jam programme in Uttar Pradesh, Uttrakhand and Bihar was a complete success,” it stated.

It also stated that farmers organised chakka jam in more than 200 places in Madhya Pradesh while in Maharashtra, farmers led the chakka jam in many places, including Wardha, Pune and Nashik. “The success of Chakka Jam was also seen in Andhra Pradesh, Telangana, Kerala and Tamil Nadu,” it stated.

The three-hour long nationwide ‘chakka jam’ by protesting farmers was held on Saturday amid tight security, even as there was no such event in the national capital which was turned into a fortress with heavy security deployment by the Delhi Police, paramilitary and reserve forces personnel to prevent any untoward situation.

The Delhi Police had also used drone cameras to keep a tight vigil at protest sites. Ten Delhi Metro stations, including Mandi House and ITO, were closed for the duration of the ‘chakka jam’ from 12 noon to 3 pm, and reopened after the protest ended.

Around 50 people were detained near Shaheedi Park in central Delhi for allegedly holding an agitation in support of the ‘chakka jam’.