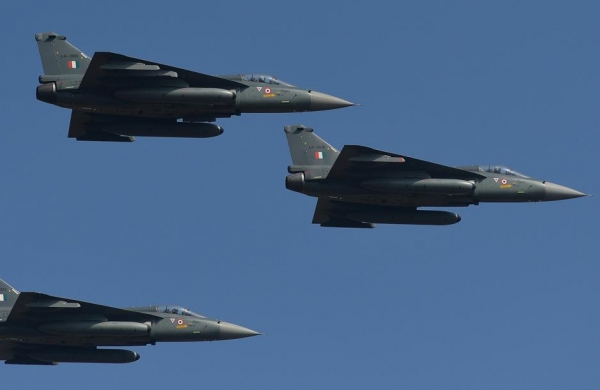 By PTI
BENGALURU: The government on Wednesday formally sealed the Rs 48,000 crore deal to procure 83 Tejas LCA from state-run aerospace behemoth Hindustan Aeronautics Ltd, a deal described by the government as the ‘biggest’ Make in India defence contract.

The contract was handed over by Director General (Acquisition), Ministry of Defence, V L Kantha Rao to Chairman and Managing Director of HAL, R Madhavan, at the inaugural ceremony of Aero India-2021, the country’s premier Defence and Aerospace show, here, in the presence of Defence Minister Rajnath Singh.

“I am very happy that HAL has got the orders for development of 83 new indigenous LCA (light combat aircraft) Tejas MK1A from Indian Air Force valued at more than Rs 48,000 crore.”

“It is probably the biggest Make in India Defence contract till date,” Singh said.

Tejas, manufactured by the HAL, is a single engine and highly agile multi-role supersonic fighter aircraft capable of operating in high-threat air environments.

Singh had on Tuesday inaugurated HAL’s second LCA-Tejas production plant here, and said Tejas is not only indigenous, but it is also better than its foreign equivalents on several parameters, besides being comparatively cheaper.

According to Madhavan, the delivery of the Tejas LCA to the IAF under the Rs 48,000-crore deal will begin from March 2024 and around 16 aircraft will be rolled out annually till the completion of the total supply of 83 jets.

He has also said that a number of countries have shown keen interest in procurement of Tejas and that the first export order is likely to come by in the next couple of years.

Madhavan had on Tuesday said the phase-1 of the facility getting ready on 35 acres of land here will enable HAL to enhance its production capacity to 16 from the current eight aircraft every year.

HAL said the 83 LCA Mk1A aircraft will be produced in two production lines here with over 500 plus production partners across India.