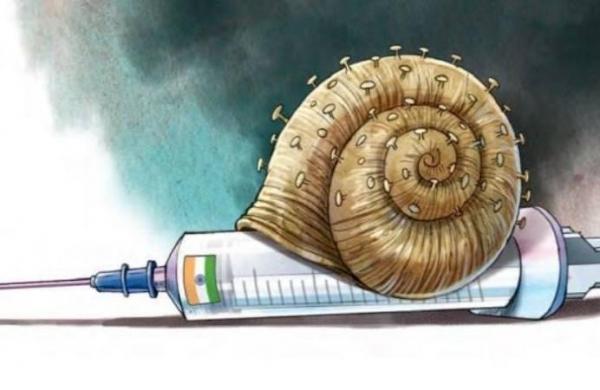 Express News Service
KOLKATA/CHANDIGARH/MUMBAI/JAIPUR:  “Vaccine suna hai magar hum logo ko na mila. Kaise milega na jante hain (I have heard about the vaccine but not got it. I don’t know how to get it either),” said Raghunandan Paswan, 50, a daily wage labourer in Vaishali district of Bihar.

Given that the Covid-19 pandemic is now raging in the villages, it has set off alarm bells in health circles. It’s a major concern, considering that medical facilities and awareness levels are below urban standards.

Take the case of West Bengal, where Covid cases are out control following the recent elections. Till May 20, 30% of Kolkata and the adjoining urban pockets spread over four districts had been vaccinated. This is in sharp contrast to the 14 rural districts in the state, where seven districts have a vaccination percentage of less than 10.

In north Bengal’s Jalpaiguri district, only 5.8% of the population had been vaccinated. This is followed by Birbhum with only 8.74%. Among the better performing rural districts is South Dinajpur, with 15.3%. No other rural district crosses 12%.

Even in these places, the gap is big between municipal centres and gram panchayats. Around 15,488 doses were administered in the Jhargram municipality area. In the rural Gopiballavpur block in the same district, with a population three times that of the pocket in Jhargram, the figure is 8,250 only. The rural-urban divide is stark in Punjab also.

Rural dists lag behind in inoculation

There are six urban districts in the state and Punjab’s total vaccination percentage of 15.27 shows that like most parts of the country, vaccination has remained a city-centric drive. It is the same story in Maharashtra. Urban centres such as Mumbai (43.11%), Pune (47.31%) and Nagpur (48.55%) are far ahead in vaccination compared to rural districts such as Gadchiroli (18.65%), Palghar (18.19%) and Hingoli (17.17%). The average vaccination across Maharashtra is 30.81%. Interestingly, semi-urban districts have performed even better than urban ones.

Kolhapur tops the chart with 62.91%. Sangli and Satara follow with 52.58 each. In Rajasthan, 43.64% of the beneficiaries in the eight mostly urban districts have been vaccinated. But the drive is poor in the 25 rural districts. The figures for Dausa, Pratapgarh and Jalore districts are 16.36%, 17.21% and 17.25%. T here are exceptions though. The rural districts in Jharkhand, Chhattisgarh, Uttarakhand and Jammu & Kashmir have performed equally well, if not better than urban areas.

In Jharkhand, the inoculation percentage in urban districts like Jamshedpur (16.53%), Ranchi (9.29%), Dhanbad (12.38%) and Deoghar (9.24%) is more or less similar in rural districts such as Chatra (10.25%), Gumla (11.36%), Jamtara (11.99%) and Khunti (15.87%). Among the main reasons for the poor vaccination in rural areas is apprehension, rumours and superstition. The lack of smart phones and access to the internet means the Aarogya Setu app and the CoWin portal are out of the reach of a sizable part of the rural population. Priority is also a factor.

In Madhya Pradesh, the primary focus was on population density. “With low vaccine availability, our priority as decided at the national level is to first vaccinate the densely populated areas, which is bound to include urban and semi-urban areas. This will gradually spread to the village level,” said Dr Santosh Shukla, the state’s immunisation officer.

On May 19 in Indore district, 17,037 doses were administered in urban zones and 832 in rural zones. This is the pattern in most other states. “Covid-19 has reached rural areas and started infecting a majority of the people. If not checked, the number of deaths due to Covid-19 from Bihar’s rural areas will surprise the world,” warned Madhusudan Singh, a prominent physician in Bihar.

(With Inputs from Srinagar, Patna, Bhopal, Ranchi, Guwahati and Dehradun)

BiharAbout 60% of urban Bihar vaccinated. Just 5% of rural population has got the shots. 76% of new cases and deaths reported from villages

Bengal30% of all doses administered in Kolkata and adjoining districts. In 14 rural districts, max vaccination in South Dinajpur (15.35%)