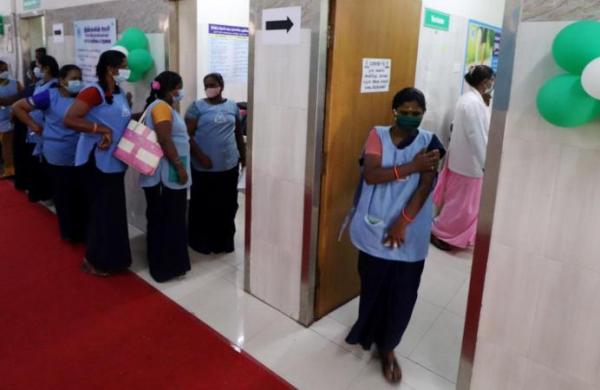 Express News Service
NEW DELHI:  About 63% of the targeted 3 lakh plus healthcare workers scheduled to get the Covid-19 vaccine on the first day on Saturday took the shot, the union ministry of health and family welfare said.

The ministry announced that 3,352 sessions were held throughout the country wherein 1,91,181 beneficiaries were vaccinated. The number was first declared to be 1,65,714 as per provisional reports but was later revised.

The ministry had earlier said at every 3,006 vaccination centre throughout the country, 100 beneficiaries would be vaccinated on the first day.

Though the immediate reasons for the fewer than targeted number of vaccinations achieved was not shared, sources in the government conceded that at most places, less than the invited beneficiaries had turned up.

In the first phase, the government plans to vaccinate nearly 1 crore healthcare workers followed by about 2 crore frontline workers comprising police, paramilitary and defence personnel, among others.

Additional secretary in the ministry, Manohar Agnani, said on Saturday that no hospitalization post vaccination anywhere in the country had been reported so far.

But he mentioned two glitches in the Co- WIN software, especially designed for the vaccination drive, which included delay in uploading of the beneficiary list at some session sites.

At some centers, due to the malfunctioning in the software, healthcare workers though not scheduled for Saturday’s session were vaccinated for which a process has been evolved and states are being advised to upload details of such beneficiaries in the Co-WIN database.

As per the details shared in the press briefing, the highest number of people, 16,693, were vaccinated in Andhra Pradesh followed by Bihar with 16,401. Two types of vaccines, including Covishield, were sent to all states, and Covaxin supplied to 12 states.

The Centre said adequate quantities of vaccines and logistics were ensured at all vaccination session sites.

At sites where Covaxin was administered, beneficiaries were also required to sign on a consent form, which said the vaccine was being rolled out in clinical trial mode.

In case of any serious adverse event following immunization, medical care and compensation will be provided by the sponsor, Bharat Biotech, the form says.