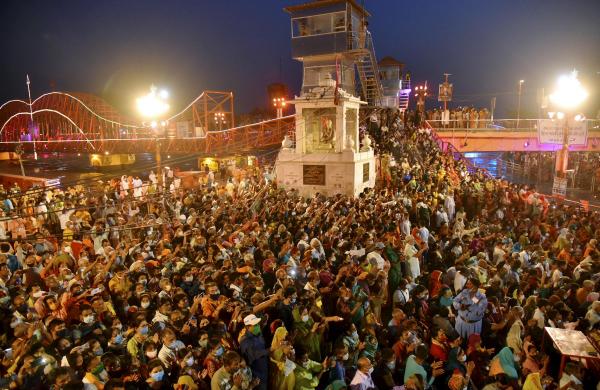 Express News Service
DEHRADUN: While an aggressive second wave has forced governments to impose lockdown-like restrictions, over 13.51 lakh devotees took a holy dip in the Ganga in Haridwar on the occasion of the third Shahi Snan of the Maha Kumbh on Wednesday, throwing all caution and Covid- 19 norms to winds.

The biggest and most auspicious of the Shahi Snans commenced at around 5 am and concluded at 6 pm.

The number of devotees who took a holy dip, though, was almost one-third of the second Shahi Snan on April 12, when over 35 lakh pilgrims had gathered in Haridwar.

Sanjay Gunjyal, inspector general, Kumbh, said, “All arrangements are in place to ensure smooth course of events. We are making sure that no gathering, jam or stampedes occur in and around the mela area.”

All safety norms, however, went for a toss as lakhs thronged the ghats and jostled to take a dip.

With cases jumping up by hundreds every day, experts said the fears of the mega event becoming a super-spreader are turning out to be true.

Anoop Nautiyal of Social Development for Communities, which has been analysing Covid-19 data in the state since March 2020, said, “Haridwar remains one of the worst-affected districts. Millions have visited the city from across the country and still are. There is no doubt now that unfortunately, the event has contributed to the pandemic spread.”

Amid criticism from various quarters to go ahead with the Maha Kumbh despite the alarming situation, cases in Uttarakhand soared to an all-time single- day high of 1,953 while 13 new fatalities were reported.

The ashram is at Kankhal, a few kilometres away from the main Har ki Pairi ghat.

Uttarakhand Chief Secretary Om Prakash said the number of devotees at the third shahi snan, said to be the most important in a series of four — was much less than expected due to the coronavirus pandemic.

On Mesh Sankranti day during the last Kumbh mela in 2010, about 1.6 crore people bathed in the Ganga at Haridwar, an official said.

Random tests among the sadhus at the akhadas indicate a coronavirus positivity rate of nearly 4 per cent.

So far, 19 of the 500 samples from the mela site have come back positive.

Police personnel were seen distributing masks in the mela area.

But social distancing norms were violated openly by the seers when they and their followers descended the steps at Har ki Pairi to wade into the river.

No masks were worn by a large proportion of them.

The sadhus from the akhadas took the dip along with their revered deities, carried in ornate palanquins, at Har ki Pairi, which was reserved exclusively for them.

Lakhs of ordinary devotees bathed at the other ghats of the river in Haridwar and Rishikesh.

Seers and Naga sanyasis of the Niranjani Akhada led by Acharya Kailashanand Giri were the first to bathe along with Anand Akhada seers.

They were followed by the Joona Akhada, which has the highest number of sadhus led by Swami Avadheshanand.

The Mahanirvani Akhada seers came next, as the batches followed one another according to their allotted time slots.

All akhadas had to complete the snan at Har ki Pairi before sunset so time management is very important, Mela Inspector General Sanjay Gunjyal said while the snan was still underway.

The shahi snans have triggered concerns over their role in possibly adding to rising coronavirus cases in the country.

Dehradun with 796 cases and Haridwar with 525 were the biggest contributors to the day’s tally followed by Nainital 205, Udham Singh Nagar 118, Almora 92, Pauri 79 and Tehri 78.

Thirteen more coronavirus deaths were reported across the state.

Many seers had resisted undergoing Covid tests at the mela site, fearing they will be stopped from the coming shahi snans, an official said.

Haridwar’s Chief Medical Officer Shambhu Kumar Jha said most of them agreed to go for the RT-PCR test once Wednesday’s snan was over.

Private and government labs have been set up at 77 spots in the mela area, he said.