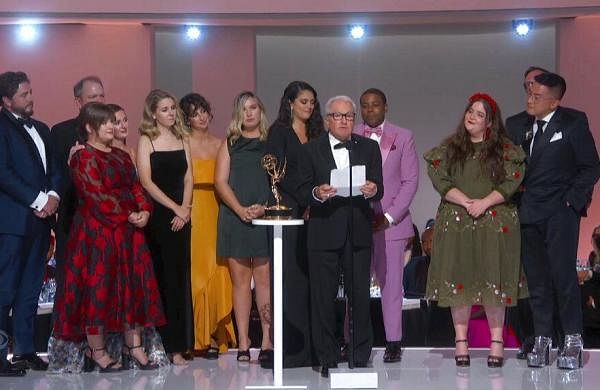 Crew members became vocal about concerns of gathering as usual to produce the live broadcast at 30 Rock’s famed Studio 8H, prompting NBC to drop the live audience and use a limited crew for tonight’s installment.

The episode opened with a “previously recorded” slate as Hanks bounded out on the familiar stage in a royal blue jacket with an oversized “5” patch over the right breast.

Rudd, the beloved comedy character actor, was set to log his fifth time at the helm of ‘SNL’.

“As you know I started the Five-Timers Club,” Hanks said. “Like you started Covid,” Fey responded.

Hanks explained that the segment was recorded earlier on Saturday and that the decision had been to scale down the show and go without an audience for safety’s sake.

“But I wasn’t going to fly across the country and not be on TV,” Hanks quipped before he invited Fey on stage.

She wore the same jacket with five emblems.

Martin, also wearing a blue-5 jacket, joined in the salute to Rudd via Zoom video.

Martin Short, who is Steve Martin’s co-star in Hulu’s quirky new hit ‘Only Murders in the Building’, butted into the latter’s shot briefly and noted that he has only hosted ‘SNL’ three times.

Thompson, ‘SNL’s’ longest-tenured player, came out alongside Rudd to present his jacket.

“Congratulations on hosting the show four and a half times,” he said, before helping him put on the jacket which did feature a full-fledged 5.

Rudd explained the show’s predicament amid the winter Covid spike and explained that the show would be filled with segments taped earlier in the week and a few classic bits selected by him and others.

Among them was 2006’s early viral video hit ‘Dick in a Box’ featuring Andy Samberg and Justin Timberlake.