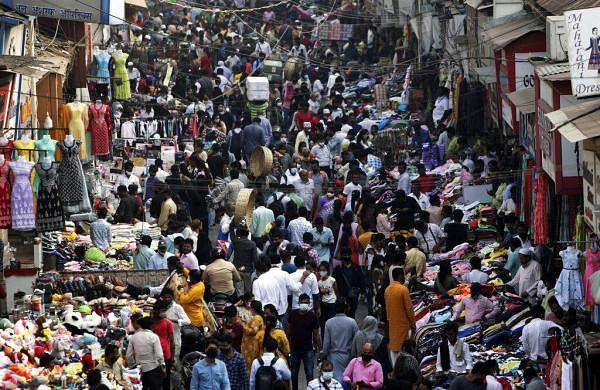 MUMBAI: Tightening restrictions in the face of surging COVID-19 cases, the Maharashtra Government on Saturday prohibited movement in public in groups of five or more from 5 in the morning to 11 at night, effective January 10 midnight.

Further, no movement will be allowed in public from 11 pm to 5 am except for essential services, a government circular said.

The state had reported more than 40,000 new cases of coronavirus on Friday.

Schools and colleges will be closed till February 15 except for activities required to be undertaken for class 10 and 12 students and administrative activities of teachers, it said.

No visitors will be allowed at government offices except with written permission of office heads.

Online interaction facility will be provided for people through video conference.

Government offices should opt for work from home and working hours should be staggered if work from office is required, the circular said.

Private offices have also been asked to rationalize the number of employees coming to work by allowing work from home and staggering working hours.

Attendance at marriages and social, religious, cultural or political gatherings will be capped at 50.

At funerals, not more than 20 persons can remain present.

Sporting events would be deferred, except national and international-level competitions already scheduled.

But such events would take place without spectators and with creation of bio- bubble for players and officials.

RT-PCR and Rapid Antigen Tests will be mandatory for players and officials every third day of the event or tournament, the circular said.

Entertainment parks, zoos, museums, forts and other ticketed places for public will be closed.

Shopping malls and market complexes can operate at 50 per cent capacity, and information about the present number of visitors should be displayed on noticeboard.

Only fully vaccinated people will be allowed to enter malls and shopping complexes, and these establishments will be closed after 10pm.

Restaurants and eateries will also function at 50 per cent capacity and present number of visitors will be displayed on the notice board.

They too can remain open only till 10 pm.

Public transport will be allowed only for fully vaccinated persons.

Competitive exams, where hall tickets have been issued, will be held as per the central government guidelines.

All other future exams will be conducted only after receiving permission from the State Disaster Management Authority, the circular said.

Thackeray said he had directed the authorities to take strict action against those who violate Covid appropriate behaviour (CAB) norms.

He appealed to people not to become “corona messengers” and endanger lives of others.

“We have been fighting the virus for the last two years and have successfully dealt with two waves of the pandemic by taking cautious steps.

The virus, in a different avatar, has been spreading rapidly,” the CM said.

“Instead of discussing whether it is mild or serious, we need to take steps to stop it, else our health infrastructure will be under tremendous pressure,” he said.

He did not wish to impose a complete lockdown, Thackeray said.

“We don’t want to harm livelihood but want to prevent crowding. When restrictions were eased last year, some people continued to follow health protocols but others were complacent and irresponsible. This will not be tolerated,” the CM said.

There was enough medical infrastructure in place, but if doctors and nurses fell sick, “where do we bring human resources from,” he asked.

Referring to the closure of educational institutions, he said steps are being taken to ensure that education is not hampered, and online education will continue.

Thackeray also appealed to people to get vaccinated at the earliest.

Curbs can be made stricter in districts where vaccination is low, he warned.

The graduate and post-graduate examinations of the premier Maharashtra University of Health Sciences in Nashik were postponed due to the rise in COVID-19 cases, especially those caused by the new Omicron variant, an official said on Saturday.

Meanwhile, as many as 68 Central Bureau of Investigation (CBI) employees working out of its Bandra-Kurla Complex (BKC) office here have contracted coronavirus infection, an official of the central agency said on Saturday.

The CBI had asked the Brihanmumbai Municipal Corporation to test 235 persons working at the BKC office, he said.

“From this lot of 235 personnel, which includes officials, 68 have tested positive. The infected ones have been asked to home quarantine,” he added.

Despite a rise in COVID-19 cases in Maharashtra, the need for hospitalization and oxygen support was low, state health minister Rajesh Tope said in Jalna on Saturday.

He said the state task force and health department had given their assessment of the COVID-19 situation to Chief Minister Uddhav Thackeray who will decide on the extent of restrictions etc.

He added that 41,000 cases were detected on Friday in the state, though there was no addition to the Omicron tally.

“Those having cough, fever etc, including children, must get themselves tested. Senior citizens with comorbidities and frontline health staff must go for the precautionary vaccine dose, the drive for which will begin on January 10,” the minister said.