COVID crisis: After being stuck in UP for hours, Oxygen tanker to travel into MP on Monday morning 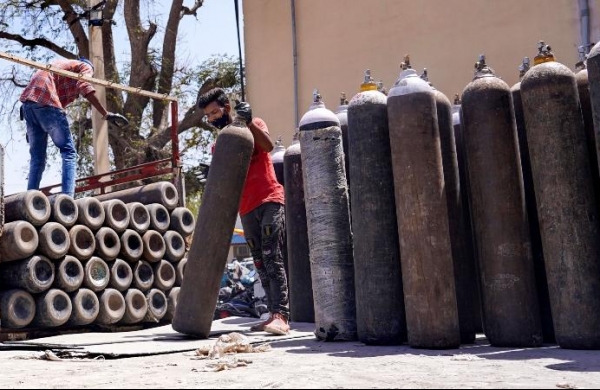 By Express News Service
BHOPAL: After several phone calls, an Oxygen tanker carrying the life-saving liquid gas from Jharkhand’s Bokaro to Sagar district of Madhya Pradesh, which was stuck in Uttar Pradesh, will finally have its passage to MP, but only on Monday morning.

According to official sources, following several phone calls from MP government to their UP counterparts, the matter was finally resolved on Sunday evening.

The tanker which was stuck in UP will leave for Sagar in MP on Monday morning.

According to Additional Chief Secretary (Home) of Madhya Pradesh, Dr Rajesh Rajoura, the ACS (Home) has given clearance over phone for transportation of oxygen tanker coming from Bokaro to Bundelkhand Medical College, Sagar.

Further, as per MP government’s official statement, the tanker will be rendered by district collector of UP’s Jhansi district for use on Monday morning to Sagar and adjoining districts in MP.

Earlier, in the day the tanker was stopped near Fatehpur in UP and boarded by two GRP cops to divert into UP only, allegedly at the behest of UP government.

Coming to know about it, the MP government officials talked over phone with their UP government counterparts for allowing the tanker to travel to MP instead of being diverted to Jhansi in UP, but the talks yielded results only after several hours.

According to MP government sources, had the tanker not been stuck in UP four hours, it would have reached Sagar by Sunday evening only.

The mix up is shocking, particularly as the both the adjoining states are ruled by BJP only, which is also in power at the centre.