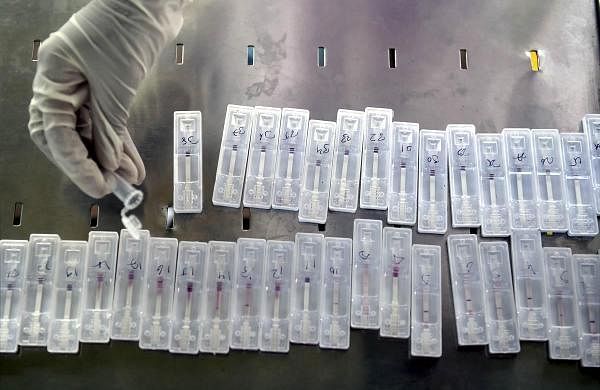 PUNE: At least 49 female students and two staff members of the Government Medical College at Miraj in Maharashtra’s Sangli district have contracted the coronavirus infection, officials said on Tuesday.

They said all the coronavirus positive students, fully vaccinated against COVID-19, and the infected staff members were admitted to the hospital attached to the college.

“A total of 51 people – 49 female students and two staff members (of the college) – have tested positive. Most students are asymptomatic, while some have mild symptoms but all are stable. All (including the staffers) have been admitted to the hospital attached to the college,” said Jitendra Dudi, Chief Executive Officer, Zilla Parishad, Sangli.

Earlier, the dean of the institute, Dr Sudhir Nanandkar, said the infection was reported in one section of the hostel where students used to gather for meals.

Meanwhile, eight more students of the Jawahar Navodaya Vidyalaya in Maharashtra’s Ahmednagar district have tested positive for COVID-19, taking the number of such cases at the institute to 90, a health department official said on Tuesday.

These cases have been recorded in the last one week or so.

“We have received the reports of eight more students and they have tested positive for COVID-19. With these eight cases, the overall tally of COVID-19 patients has reached 90 and these include six staffers of the school,” said Dr Prakash Lalge, health officer of Parner tehsil in the adjoining district.

The district administration had said that a majority of the infected students are “asymptomatic” and currently admitted to hospital, where their health condition is stable.

The school campus has been declared a ‘containment zone’ after the detection of cases among students and staff members.

The school, part of the Navodaya Vidyalaya network that comes under the Union education ministry, is located at Takali Dhokeshwar village.

Maharashtra on Tuesday reported 2,172 fresh coronavirus cases, up by 50 per cent from 1,426 infections recorded a day before, and 22 new deaths, the health department said.

However, the silver lining was that the state did not record any fresh case of the new coronavirus variant Omicron in the last 24 hours.

The state has so far recorded 167 cases of Omicron, marked as a ‘variant of concern’ by the WHO that is causing worries all over the world.

“Twenty-two COVID-19 deaths were reported in the state today. The case fatality rate in the state is 2. 12 per cent,” the department said in a bulletin.

The coronavirus recovery rate in the state is 97.65 per cent.

Maharashtra now has 11,492 active cases of the infection.

Mumbai recorded 1,377 new COVID-19 cases, a steep rise by 70 per cent from a day ago, and one more death, according to a separate bulletin issued by the Brihanmumbai Municipal Corporation (BMC).

Nine districts and five municipal corporations did not report any new COVID-19 case, it said.

Nagpur, Latur and Akola regions recorded one fatality each, the bulletin said.

Aurangabad and Kolhapur regions did not report any death linked to the infection.

Currently, 1,11,232 people are in home quarantine and another 910 in institutional quarantine, it added.