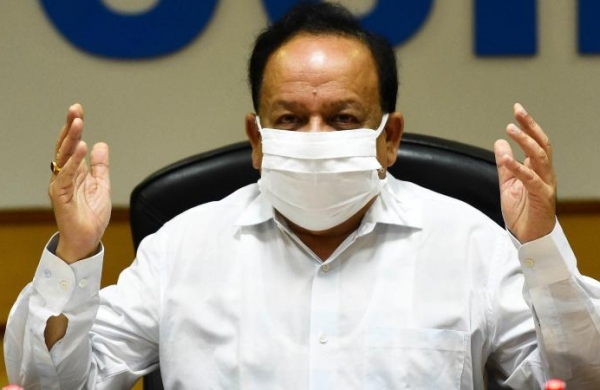 By PTI
NEW DELHI: Union Health Minister Harsh Vardhan on Friday said the COVID-19 vaccination drive will be extended in the coming days and asserted that there should not be any misconceptions about the two Indian vaccines being administered in in the country.

During the Question Hour in Lok Sabha, Vardhan said India has vaccinated 3.5 to 4 crore people so far and side effects of the vaccines has been recorded at 0.000432 percent.

“Every vaccine doesn’t require universal immunization and all these priority groups whom we are vaccinating today like healthcare staff first and then senior citizens and people aged between 45 and 59 years, it will be extended in the coming days ‘all these are based on experts’ opinion.

“Not only Indian experts, but we have also consulted WHO guidelines regarding priority groups,” he said.

Serum Institute’s Covishield and Bharat Biotech’s Covaxin have been currently approved for restricted emergency use in India.

Replying to a question by NCP MP Supriya Sule on whether the government is aiming at universal immunisation of COVID-19 vaccine, Vardhan said it is not scientifically necessary to administer the vaccine to each and every person in the country.

“Not each and every person in the world will be vaccinated. The prioritisation process is a dynamic process.”

“The behavior of the virus is also dynamic. All things are based on scientific facts, scrutiny and vision of the overall scientific and health community,” he said.

Replying to a question by Congress MP Ravneet Singh Bittu about the fear in people that the COVID-19 vaccine will harm them in the future, Vardhan asserted that taking vaccines is the way to get rid of vaccine-preventable diseases.

“We got victory over polio and chicken pox due to the vaccination,” he said.

There are detailed pre-clinical and clinical trials, which get thoroughly studied by the experts before a vaccine gets the nod, the minister said, adding that “There should not be any misconception regarding the COVID-19 vaccines and the people should avail the facilities given by the government get themselves vaccinated.”

Vardhan further noted that there is a well-defined group of experts called the National Expert Group on Vaccine Administration (NEGVAC)).

“What you are seeing today is the hard work of the people in the ministry and this group, which was set up by the prime minister in August.”

“Since then, they have been working closely regarding all scientific developments related to this,” he said.

The minister also pointed out that the Subject Expert Committee has cleared two Indian vaccines (Covishield and Covaxin) after examining data provided by these companies.

Data provided by two Indian companies was also examined by the World Health Organisation, he added.

Replying to questions on Thalassemia, Vardhan, “Not a single thalassemia patient was deprived of blood during the COVID-19 pandemic period,” he noted and said blood is provided free of cost to these patients.

Thalassemia major and the severe form of Thalassemia Intermedia (TI) constitute the major burden of disease and both are commonly managed by regular lifelong blood transfusions and iron chelation.

These syndromes are caused by inheritance of abnormal (beta) thalassemia genes from both parents or abnormal beta-thalassemia gene from one parent and abnormal variant haemoglobin gene (HbE, HbD) from the other parent.

The minister said in the last year, 75 medical colleges have been sanctioned by the government.

“A total of 30,000 Health and Wellness centers were opened under the Ayushman Bharat scheme in the last one year during the COVID-19 pandemic period,” he said.