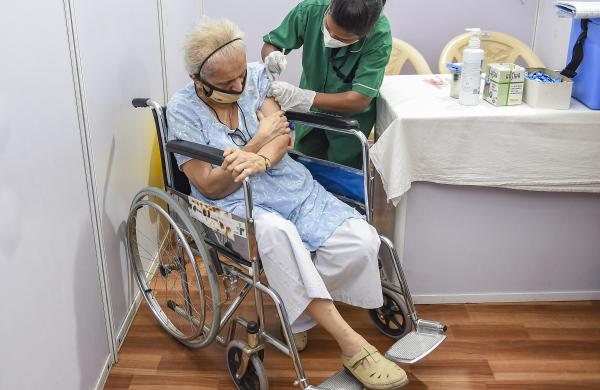 By PTI
KOTA: Teething troubles were witnessed at a few places in Rajasthan as the second phase of the nationwide COVID-19 vaccination drive began on Monday.

People aged above 60 and those between 45 and 59 who are suffering from comorbidities are eligible for vaccinations under the second phase of the drive.

The drive was launched on January 16 with healthcare and sanitation workers being inoculated in the first phase.

The day started with enthusiasm among the senior citizens who reached the vaccination centres for getting the first dose.

However, problems like delay in registration were encouraged during the initial hours.

At some centres including the one at Jaipuria hospital in Jaipur, people had to wait for one to two hours before getting the shot while technical glitches delayed the drive at a few places including six sites in the super-speciality block of the new medical college hospital in Kota.

The vaccination drive was held at nearly two dozen centres in Jaipur and 118 sites, including those at private hospitals, in the Kota division comprising Kota, Bundi, Jhalawar and Baran districts, officials said.

In Jaipur, Governor Kalraj Mishra got vaccinated at the Raj Bhavan.

The first dose was administered under the supervision of the principal of SMS medical college Sudhir Bhandari.

Thanking scientists for successfully developing the vaccine in a short time while following all standards and prescribed procedures, Mishra appealed that eligible people should get both doses of the vaccine on time without any hesitation.

Mishra said that there should be no carelessness after the first dose of the vaccine and protocols like social distancing, wearing face masks should be properly followed. Meanwhile, 72-year-old Mangla Dixit was the first to receive the jab at the SMS government hospital in Jaipur.

After getting the shot, she told reporters that those eligible should not hesitate in getting vaccinated.

“The prime minister too got the first dose of vaccination today. It is safe and people should come forward,” she said.

Prime Minister Narendra Modi took his first dose of the COVID-19 vaccine at the All India Institute of Medical Sciences (AIIMS) in the national capital and appealed to all those who are eligible to get inoculated.

“I am feeling at ease with no complications or trouble and I appeal to the people to move to vaccination sites in their areas to get vaccinated,” 82-year-old Sharma said after getting the shot.

According to chief medical and health officer, Jhalawar, Sajid Khan, “There has been a good response from senior citizens at most of the vaccination sites in Jhalawar, particularly in rural areas there is no apprehension among them.”

While the vaccination is free at government hospitals, it costs Rs 250 per dose in private hospitals as fixed by the government.