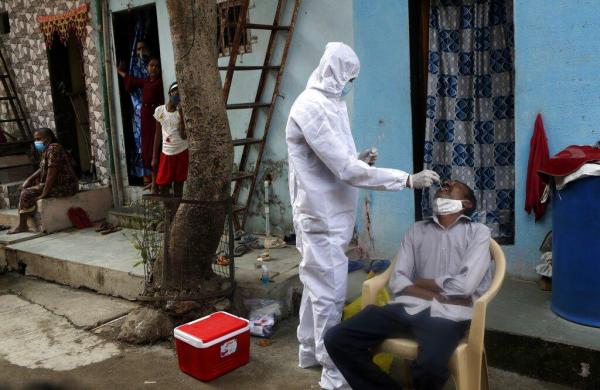 By PTI
NEW DELHI: The Union health ministry on Tuesday asked Maharashtra, Madhya Pradesh, Punjab, Jammu and Kashmir and Chhattisgarh to expedite the vaccination of healthcare and frontline workers so as to confer immunity in the shortest possible time-frame in the wake of a rising trend of COVID-19 cases and positively rate in some districts.

In a letter to the Maharashtra government, Additional Secretary in the health ministry Manohar Agnani said a rising trend of COVID-19 cases and the positivity rate has been observed in six districts — Pune, Nagpur, Mumbai and Suburban, Amravati, Thane and Akola — over the past few days.

Similarly, in a letter to the Madhya Pradesh government, he said a surge in the number of cases and the positivity rate has been observed in three districts — Indore, Bhopal and Betul.

In Punjab, Agnani said an increase in the number of cases and the positivity rate has been observed in three districts — SBS  Nagar, Kapurthala and Sri Muktsar Sahib — while the same has been witnessed in Pulwama district of Jammu and Kashmir and Rajnandgaon district of Chhattisgarh.

“Hence, it is advised that the vaccination of HCWs and FLWs in these districts is expedited so as to confer immunity in the shortest possible time-frame, as they are also involved in containment, surveillance and management of COVID-19 cases.

“You are requested to kindly direct the district officials concerned to immediately undertake measures for the maximum coverage of HCWs and FLWs with the COVID-19 vaccine at the earliest,” the letter stated.

Meanwhile, after slipping below 5,000 for a day, new COVID-19 cases again crossed the 6,000-mark in Maharashtra on Tuesday on the back of a spike in the Akola division, while 51 patients died, a multi-week high, in the state, the health department said.

Also, Maharashtra on Tuesday reported one of the highest fatality counts in recent times at 51, taking the death toll to 51,857, said a health department official.

Remaining seven deaths occurred in the period before the last week, he said.

The Akola division in Vidarbha reported the highest number of cases in the state at 1,392, leaving behind the Mumbai division, which usually leads the daily infection tally, at 1,250.

The Akola division, which consists of Amravati, Yavatmal, Buldhana, Washim and Akola districts, has emerged as the new COVID-19 epicentre in Maharashtra.

The Pune division also reported higher number of cases than the Mumbai division.

“Pune city alone reported 679 cases, highest by a municipal corporation in the state. With this, the citys cumulative COVID-19 figures reached 2,05,437, while the death toll stood at 4,566,” the official said.

Within the Akola division, areas under the Amravati Municipal Corporation reported 515 cases and other parts of the district 271.

Also, 5,869 patients were discharged from hospitals during the day, taking the state’s recoveries to 20,05,851, the official said.

Currently, there are 2,79,288 people in home quarantine and 2,484 in institutional quarantine.

However, deaths from the infection dropped to a two-week low of 18 on Monday.

The state reported a drop in daily cases at 5,210 on Monday, after logging over 6,000 infections for three preceding days, while 18 more patients died, the lowest in two weeks, taking the toll to 51,806.

The daily Maharashtra tally of 5,210 was the lowest in five days.

Statewide deaths from the disease rose to 51 on Tuesday.

There has been a sharp spike in COVID-19 cases in the Vidarbha region, especially in Amaravati, Akola and Yavatmal districts, forcing authorities to bring back fresh curbs to limit movement of people and some commercial activities.

While strict measures have been taken in the last couple of days to curb the COVID-19 spread, health officials have not ruled out further rise in cases in the coming days.

I S Chahal, Mumbai civic commissioner, said, “Daily figures could rise in the coming days. We are taking steps to educate people about the importance of wearing face masks and following physical distancing norms.”

Travel from 11 districts in Vidarbha to Parbhani has been placed under certain restrictions so that the spike in cases in that part of the state does not have an impact here, Collector Deepak Muglikar told PTI.

“We have told private buses as well as those of MSRTC to not bring passengers from these parts to Parbhani. We have also ordered the closure of places of worship till February 28,” he said.

As per the order issued by the collectorate, the travel restrictions are applicable for people from Nagpur, Chandrapur, Gadchiroli, Yavatmal, Amravati, Akola, Washim, Bhandara, Gondia and Wardha etc though emergency movement will be permitted.

On the other hand, educational institutions were ordered to remain shut till March 31 in Jalna in view of rising COVID-19 cases in the district, an official said on Tuesday.

The decision was taken after a meeting during the day chaired by district collector Ravindra Binwade, he added.

However, school for classes XI and XII will function as usual, the official informed.

Permission for social, religious and political gatherings have been withdrawn, he added.

The district recorded 117 cases, including 28 in Jayde Wadi village in Bhokardan tehsil, taking the overall caseload to 14,782.

There are 112 cases in the village currently, the official said.

The administration ordered the closure of the famous Shri Rajur Ganpati temple in Bhokardan tehsil as part of measures to contain the spike.

Meanwhile, the Pune Municipal Corporation (PMC) on Tuesday directed private hospitals in the city to reserve around 2,000 to 3,000 beds for infected patients.

In a virtual meeting with private hospitals, PMC commissioner Vikram Kumar and civic health officials instructed hospitals to reserve maximum beds for COVID-19 patients and not to turn any patient away.

“We have instructed hospitals to keep at least 2,000 to 3,000 beds for COVID-19 patients and also asked them not return anyone away,” civic health chief Dr Ashish Bharati, said.

Private hospitals will notify the civic body about the number of beds they have reserved and accordingly, the dashboard will be updated, he said.

Currently, the PMC has over 1,200 to 1,500 beds available at civic and government-run hospitals, the official said.

Apart from this, COVID-19 care centres in Pune are also being readied.

As many as 661 new cases and four casualties were reported in Pune city on Tuesday, a civic official said.