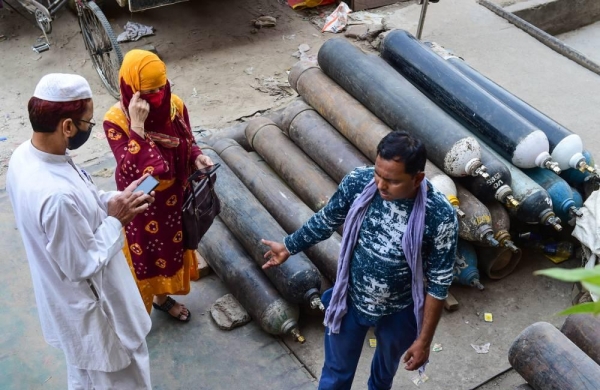 By Express News Service
NEW DELHI:  Amid reports of acute shortage of oxygen in some states and instances of some private hospitals moving court for urgent directions to ensure timely supply of the life-saving gas, the Centre on Thursday said it is giving 6,822 MT of liquid medical oxygen per day to 20 states against a demand of 6,785 MT/day.

The announcement came after a high-level meeting chaired by Prime Minister Narendra Modi to take stock of the situation.

In the review meeting, the PM stressed on increasing production of oxygen, raising the speed of distribution and using innovative ways to provide oxygen support to health facilities. He also said that states should come down heavily on hoarding.

According to the Centre, availability of liquid medical oxygen has been raised by 3,300 MT per day with contributions from private and public steel plants, industries, oxygen manufacturers as well as through prohibition of supply of oxygen for non-essential industries.

Modi also said there is a need to fix responsibility with the local administration in cases of obstruction and also asked ministries to explore various innovative ways to increase production and supply of oxygen.

It also directed states to ensure uninterrupted production and supply of medical oxygen and its transport along inter-state borders and said the district magistrate and superintendent of police of the district concerned will be held responsible if there is any violation of its order.

The directive under the stringent Disaster Management Act 2005 was issued by Union Home Secretary Ajay Bhalla in the wake of reports that some states blocked supply of medical oxygen to other states amid sudden spike in coronavirus cases and demand for it.

Those who are found to be violating the order will be punishable up to one year of jail or fine or both.

Bhalla said the availability of adequate and uninterrupted supply of medical oxygen is an important pre-requisite for managing moderate and severe cases of COVID-19 and with the increasing cases, the medical oxygen supply will need to keep pace with the requirements of the states and union territories.

“Therefore, to ensure the uninterrupted supply of medical oxygen across the country for management of COVID-19 patients, in exercise of powers conferred under section of the DM Act, the undersigned, in the capacity as chairperson, National Executive Committee, hereby directs the state and Union Territory governments and state and Union Territory authorities to ensure the following measures within their areas of jurisdiction,” the home secretary said.

The order said there should be no restriction on the movement of medical oxygen between the states and transport authorities shall be instructed to accordingly allow free inter-state movement of oxygen carrying vehicles.

No restrictions shall be imposed on oxygen manufacturers and suppliers to limit the oxygen supplies only to the hospitals of the state and the union territory in which they are located.

No authority shall attach the oxygen carrying vehicles passing through the district or areas for making supplies specific to any particular district or area, it further said.

Supply of oxygen for industrial purposes, except those (nine specified industries) exempted by the government, is prohibited from April 22, 2021 and till further orders, according to the directive.

The order said that the states and union territories shall strictly abide by the supply plan of medical oxygen prepared by Empowered Group-II and as revised from time-to-time.

India registered over 3.14 lakh new coronavirus cases in a day, the highest-ever single-day count recorded in any country, taking the the total tally of COVID-19 cases in the country to 1,59,30,965.

According to the Union Health Ministry data updated on Thursday, a total of 3,14,835 fresh infections were registered in a span of 24 hours, while the death toll increased to 1,84,657 with a record 2,104 new fatalities.

In his order, the home secretary said due to rapid rise in COVID-19 cases and with increasing cases of positivity, various states and union territories have imposed some additional restrictions on certain activities and weekend lockdowns, curfews etc. to break the chain of transmission and to contain the spread of COVID- 19.

He said since medical oxygen is an essential public health commodity and any impediment in the supplies of medical oxygen in the country may critically impact the management of patients suffering from COVID-19 disease in other parts of the country.

Bhalla said the EG-II is mandated for coordinating medical logistics, including medical oxygen and it has reviewed the supply of oxygen for industrial use in order to divert the same to meet the rising demand for medical oxygen in the country and save precious lives.

The order also referred to the recent ban on supply of medical oxygen to industrial units, except in nine specified categories.

In view of the surge  in oxygen demand due to an exponential rise in the No. of Covid patients admitted in hospitals, the Centre has raised the quota of oxygen for states.