Covaxin capable of neutralising delta plus variant of Covid-19 too, shows ICMR study 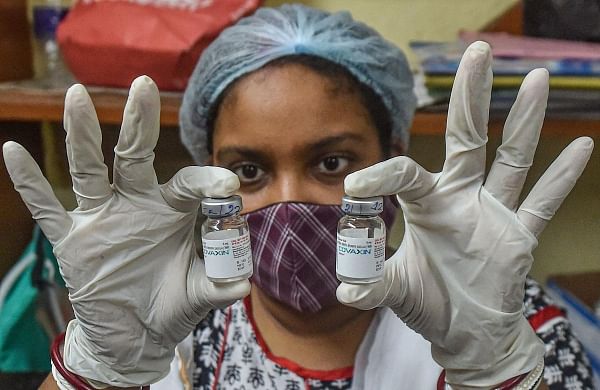 Express News Service
NEW DELHI: A study carried out by the ICMR has shown that Covaxin, the country’s first fully developed indigenous vaccine, is capable of neutralising the delta plus variant of the Covid-19 virus just as it can neutralise delta albeit with lower efficacy.

The Delta plus variant of the SARS CoV 2, with 70 cases of infection deteced in India so far, was seen as a potential public health threat due to its immune escape properties.

In July, the Hyderabad-based Bharat Biotech had released data from the phase 3 clinical trials of Covaxin and said that it demonstrated overall efficacy of 77.8 per cent against symptomatic Covid-19 infection.

The whole-virion inactivated SARS-CoV-2 vaccine used for mass immunization in India had shown a 65.2% protection against the delta variant in a double-blind, randomized, multi-centre, phase 3 clinical trial, lower than the virus variant against which the vaccine had been specifically designed last year.

The scientists associated with the National Institute of Virology under the ICMR meanwhile said in the latest study that all fully vaccinated recipients of Covaxin, whether previously infected by Covid-19, never infected, or those with breakthrough infections, show sufficient immune responses against delta, AY. 1 (a type of delta plus detected in India) and B.1.617.3 variants.

It was found that all the three groups, with vaccination, had enough response to neutralise all the variants.

“Those recovered from Covid-19 are low in number and infected last year with B.1 variant so they either had no or low antibody protection but still after immunisation the neutralisation titer was found to be very high and protective in them due to boosting effect,” a researcher from NIV told The New Indian Express.  A report by INSACOG, a network of laboratories for Covid virus genomic surveillance, had in June associated the delta plus variant with increased transmissibility, stronger binding to receptors of lung cells and potential reduction in monoclonal antibody response.

The first case of infection with the variant had been detected in Maharashtra on April 5, followed by other states, prompting the Centre to raise an alarm and issue public health measures to curb its spread.

However, later reports by the consortium said that the variant, contrary to concerns being raised, may not be more transmissible or virulent than the delta variant, which had caused the devastating second wave in India.