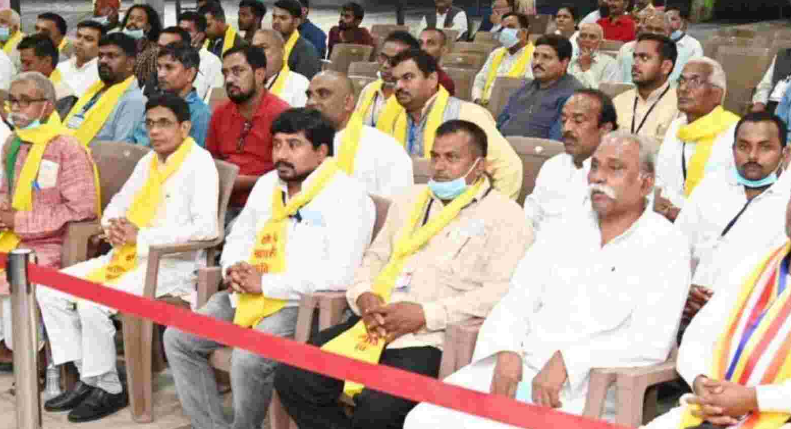 The delegation of All India Kurmi Mahasabha had a courtesy call on Chief Minister Bhupesh Baghel at his residence office in the capital Raipur this evening. It is worth mentioning that a Mahasabha has been organized under the aegis of All India Kurmi Samaj and Voter Jagriti Manch from August 10 to 12 at Agrasen Dham in the capital Raipur. Representatives of Kurmi Samaj from different states of the country have participated in the Mahasabha. Addressing on the occasion, Chief Minister Shri Baghel said that continuous work is being done for the upliftment of people of every society and class for the overall development of Chhattisgarh. In these, such public welfare programs are being conducted using innovation, so that people get plenty of employment opportunities. Also, their income should increase continuously. He said that as a result of this, today Chhattisgarh model of development is being discussed all over the country. Chief Minister Shri Baghel said that the development of the entire state has got a new direction due to the schemes and programs being run in Chhattisgarh. Due to this, all sections of people including farmers, laborers, poor, tribals have started getting ample opportunities to move forward. Kanojia etc. also addressed and appreciated the programs being run by the state government under the leadership of Chief Minister Mr. Baghel for the development of Chhattisgarh. National President All India Kurmi Samaj and Voter Jagriti Manch Shri Nand Kumar Baghel and other officials in the delegation Santosh Kumar, Kranti Kumar, Narayan Singh, Anil Kumar Chaudhary, Shyam Patel, Sunil Deshayi, Vimal Sahu, Sunil Gehlot, Smt. Sharmila Johri, Dr. Dinanath Verma, K.P. Kurmvanshi, D.P. Patel, Ms. Pooja Moure, Ms. Pratibha Singh, Vijay Patel, D. Rajasekhara Reddy, Ramashankar Patel etc. were included. Like this:Like Loading… Continue Reading