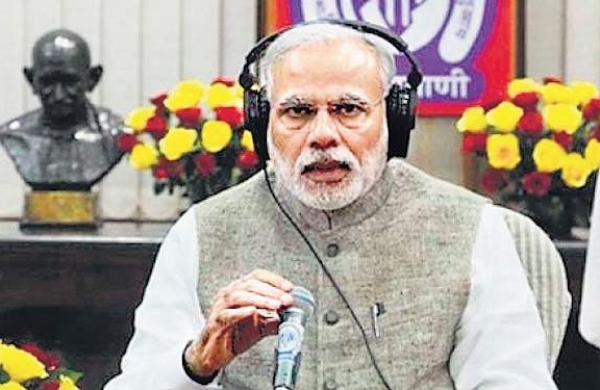 By PTI
NEW DELHI: Prime Minister Narendra Modi said on Sunday that the country was saddened by the “insult” to the Tricolour on Republic Day, referring to the religious flag incident at Red Fort during the farmers’ tractor parade.

In his monthly ‘Mann ki Baat’ broadcast, Modi maintained that his government is committed to “modernising” farming and has been taking many steps.

“The efforts of the government will also continue in future,” he said, amid intense protests by a section of farmers from states like Punjab, Haryana and UP near the Delhi border against three farm reform legislations enacted by his government.

Farmer unions have demanded that these laws by repealed.

While recounting a number of developments in January this year, including India’s remarkable come-from-behind series win over Australia in the recent Test series, Modi made a brief reference to the farmers’ tractor rally on Republic Day which witnessed incidents of violence.

“Amidst all this, the country was saddened by the insult to the Tricolour on January 26 in Delhi. We have to infuse times to come with new hope and novelty. Last year, we displayed exemplary patience and courage. This year too, we have to work hard to attain our resolves. We have to take our country forward at a faster pace,” he said.

Referring to India’s corona vaccination exercise underway, the prime minister said the country has not only rolled out the world’s largest vaccination drive but is also vaccinating its citizens at the fastest rate.

The country has vaccinated over 30 lakh corona warriors in 15 days, he said, adding the US and the UK took 18 and 36 days to reach this figure.

“Just as India’s fight against Corona became an example, our vaccination programme too is turning out to be exemplary to the world,” he said.

Noting India’s decision to send vaccines to several countries and the praise it has received from their governments and citizens, he said during the moment of crisis India is able to serve the world since it is capable and self-reliant in the field of medicines and vaccines.

“The same thought underpins the Atmanirbhar Bharat Campaign. The more India is capable, the more will it serve humanity; and the world will benefit more,” Modi said.

Speaking of the recent announcement of Padma award winners, he said the tradition of conferring the honour on unsung heroes that was started a few years ago has been maintained this time too.

“I urge all of you to know more about these people and their contribution,” he said.

Noting that the country is approaching its 75th year of Independence, Modi urged people, especially youngsters, to write about freedom fighters and incidents associated with their struggle.

The freedom struggle was fought with full might in every part, every city, every town and village of India, he said, and highlighted the comments of a resident from Munger in Bihar about the ‘Tarapur Martyr Day’.

On February 15, 1932, Britishers had mercilessly killed several of a group of brave young patriots, and the incident has not received as much publicity as it should have, he said.

“Write books about the saga of valour during the period of freedom struggle in your area. Now, as India will celebrate 75 years of her freedom, your writings will be the best tribute to those heroes of our freedom. An initiative has been taken for young writers for the purpose of India Seventy-Five. This will encourage young writers of all states and of all languages,” Modi said.

With the country observing Road Safety month between January 18 and February 17, the prime minister said road accidents are a matter of concern not just in our country but also the world over.

Modi often highlights the presence of different aspects of Indian tradition and culture in different parts of the world during his monthly radio address and this time spoke of yoga’s popularity in the South African country of Chile.

You will be pleased to know that there are more than 30 yoga schools in Santiago, the capital of Chile, he said, and noted that the name of the Vice President of the Chilean Senate is Rabindranath Quinteros, inspired by India’s nobel laureate poet-philosopher Rabindranath Tagore.

The prime minister also highlighted remarkable efforts of individuals and groups of people in different parts of the country in various fields.