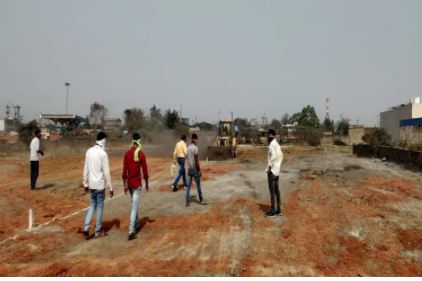 Zone 1 Municipal Investment Department team of Municipal Corporation Raipur took action against illegal plating in Gondwara of Yatiyatan Lal Ward No. 4 of Zone 1. Illegal plating was being done on about two and a half acres of private land in 3 places near Gondwara railway crossing, behind the Grace Residency. The action was taken in the presence of Zone Executive Engineer Netram Chandrakar, Zone Executive Engineer Subhash Chandrakar, Zone Municipal Investment Deputy Engineer Akshay Bhardwaj, Sharad Deshmukh. Zone commissioner Netram Chandrakar said that the team reached the spot on receiving public grievances as per the order of Municipal Corporation Commissioner Saurabh Kumar. To prevent illegal plotting, the Muram road was cut with 3D assistance. A letter has been written to the Raipur Tehsildar to give information about the real land owner of the private land soon. As soon as the information of the actual land owner is received from the Tehsildar Raipur office, an FIR will be registered in the police station concerned to take legal action against the landowner concerned under the provisions of the Corporation Act.