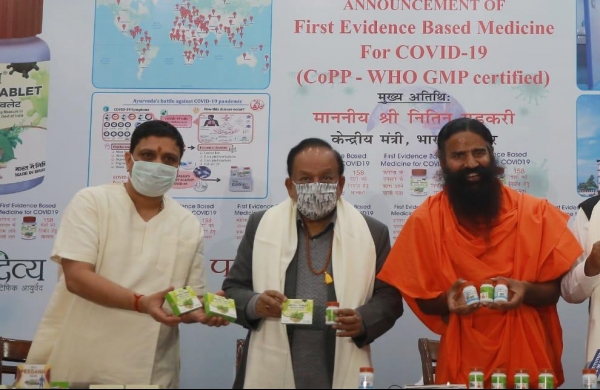 Express News Service
DEHRADUN: In the wake of the controversy over Coronil tablet made by yoga guru Ramdev’s Patanjali group, Uttarakhand health department has said the drug can only be used as a supplementary measure and not for treatment of Covid-19 patients.

YS Rawat, joint director, state licensing authority (AYUSH), said, “The drug by Patanjali is allowed for use as a supporting measure, like Vitamin C or multivitamin and mineral tablets, not as the cure for Covid-19.”

Union AYUSH ministry had written to the state licensing authority on January 14 saying it might consider Patanjali’s application for using Coronil tablets as a supporting measure in the management of Covid-19 without claiming cure.

A controversy erupted over Coronil being touted as ‘Covid cure’ after Ramdev re-launched the drug last week, with the IMA seeking explanation from the Union health minister.

A woman clerk of Madhya Pradesh health department died around 12 hours after getting the second dose of the Covishield vaccine in Barwani district.

This is the first case of post-vaccine death in MP. District chief medical officer Anita Singare said Rajni Sen, 58, had no health problems.

She was given the shot at around 3.30 pm on Tuesday. She started feeling uneasy soon and was admitted at a private hospital.