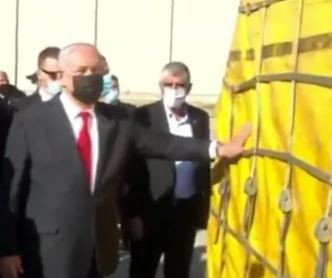 Israeli Prime Minister Benjamin Netanyahu on Wednesday said that the country will start a coronavirus vaccination drive from December 27 onward as the first batch of Pfizer and BioNTech vaccine arrived in Tel Aviv. With a population of over 88 million people, Israel received the first of 80 million doses it had ordered from pharmaceutical giants Pfizer and BioNTech. Netanyahu, while overseeing the unloading of the shipment from a cargo plane, said that the country’s health services are capable of vaccinating 60,000 people per day.

Netanyahu added that a “much bigger” cargo is expected to arrive on Thursday, December 10. The Israeli Prime Minister urged every eligible person in the country to get vaccinated as he vowed to take the first shot himself in order to clear any doubts that people might be having regarding vaccines. The shipment arrived a day before the Jewish holiday of Hanukkah, which is a festival of lights. Netanyahu said that the arrival of the vaccine has brought great light to Israel.

Pfizer and BioNTech’s COVID-19 vaccine has already earned approval in the United Kingdom, which became the first Western country on Tuesday to start inoculating people outside a trial setting. Canada’s health regulators have approved the Pfizer-BioNTech vaccine. The American and the German firm, who have developed the vaccine together, are seeking approval in the United States as well, where the Food and Drug Administration (FDA) is expected to grant emergency use authorisation in the next couple of days.