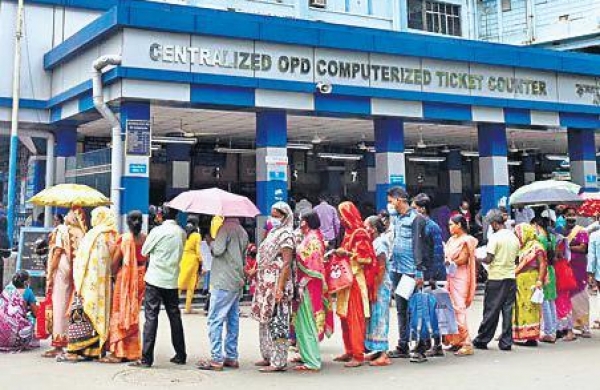 Express News Service
NEW DELHI: Less than half the money allocated for the Centre’s flagship health scheme Pradhan Mantri Jan Arogya Yojana has been utilised in 2020-21, as health services across the country suffered due to pandemic and lockdown, government data shows.

As per the expenditure profile document of the Union Ministry of Health and Family Welfare, Rs 6,400 crore was allocated for the scheme before being revised to only Rs 3,100 crore as hospitalisation rates drastically fell March onwards.

For the coming fiscal too, the government has estimated Rs 6,400 crore for the programme.

Launched in September 2018, PMJAY provides for free secondary and tertiary hospitalisation of up to Rs 5 lakh for nearly 10 crore families across the country and covers 1573 procedures including 23 specialties.

Officials in the National Health Agency said the massive fall in expenditure under it had been on account of the change in health seeking behaviour of listed beneficiaries during the pandemic period.

“In several states, most of the functional hospitals had converted into Covid hospitals because of which services for other ailments took a beating,” said an official in the finance section of the NHA.She added that delay in release of funds by several states have also been a major concern.

“We release central share only after the state contributes its share and that equation got disrupted due to the pandemic.”

The latest economic survey tabled in the Parliament said that general care-seeking as seen in the PMJAY claims exhibited a V-shaped recovery after falling during the lockdown but has reached the pre-Covid levels in December 2020.

A report titled “PM-JAY Under Lockdown: Evidence on Utilization Trends PM-JAY” by the NHA released in June had said that women, children and the elderly were hit worse than men. While cancer treatment fell by nearly 64 per cent, child birth- both normal deliveries and Caesarean Sections — fell by 26 %, the report revealed.

Also, there was wide variation in claim volume trends across states, with the steepest declines (over 75 per cent) in Assam, Maharashtra and Bihar, while much smaller declines (about 25 per cent or less) were observed in Uttarakhand, Punjab and Kerala.

Under the scheme, general medicine has been the overwhelmingly major clinical specialty used since 2018, with its share continuously growing.