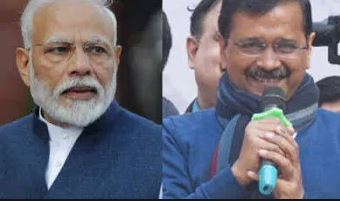 Stubble burning is also a reason behind the third wave of Kovid-19 in the capital. After Delhi Health Minister Satyendra Jain, now Chief Minister Arvind Kejriwal has repeated the same thing. In a meeting with Prime Minister Narendra Modi on Tuesday, he described pollution as one of the reasons for the third wave of corona in Delhi. He said that the Prime Minister intervened to get rid of the pollution caused by stubble burning in the neighboring states. The Chief Minister also demanded to have 1,000 additional ICU beds reserves in the government hospitals of the Center till the third wave.

Kejriwal told PM Modi that 8,600 cases were reported in Delhi on November 10, which was the third peak of Corona. He said that since then new cases and positivity rates have been steadily decreasing. The Delhi government has repeatedly said that due to pollution, the corona in Delhi has increased. A day earlier, Delhi’s Health Minister has also attributed the increased pollution due to stubble burning to the third wave of Corona. On Monday, the representatives of the Delhi government went to the office of the Air Quality Commission set up by the central government and made their point.

The central government has created an Air Quality Commission (AQC) on the issue of pollution rising in Delhi due to burning of stubble in Punjab and Haryana. Atishi, chairperson of the Environment Committee of the Delhi Legislative Assembly, said, “The committee has met the commission to demand accountability of the Chief Ministers of Punjab and Haryana for burning stubble and taking action against them by filing a case. The governments of Haryana have also been requested to issue an order to resolve the straw with bio decomposer technology. ” Kejriwal has demanded intervention from the PM on this issue.