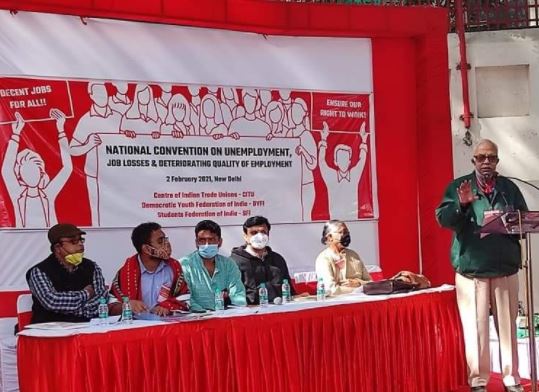 The Convention on Unemployment, Eradication of Jobs, Declining Quality of Employment was jointly organized by the Center of Indian Trade Union, CITU Democratic Youth Federation of India and Students Federation of India. Several Labor leaders of the country including former MP Tapan Sen addressed the convention in Delhi. The current situation in the country was discussed. Unemployment allowance was also demanded.

Representatives of all three organizations from all provinces participated in this convention. Archana Dhruva, in-charge of Student Federation of India Durg district participated in this convention. The Convention supported the ongoing agrarian movement to withdraw agricultural laws, the withdrawal of the Electricity Bill Amendment Bill 2020, and to make legal provisions for the minimum support price.

At the convention, the speakers said that unemployment was already at a very high level due to the global crisis. The lockdown has made the situation worse. The labor force survey 2019 report of the Ministry of Labor concludes that the unemployment rate in our country was the highest in 45 years. A January 2021 report by the Center for Monitoring Indian Economy stated that the number of unemployed reached 38.7 million in December, higher than the figures before the lockdown. The unemployment rate indicates the proportion of unemployed of working age population who are willing to work but the government is making fun of them instead of providing them jobs or employment. The convention demanded that the government should provide employment to the unemployed and till then unemployment allowance of 5000 per month should be given to the unemployed through statutory measures.