Continuation of stubble burning in the fields continues, not even administration is taking action 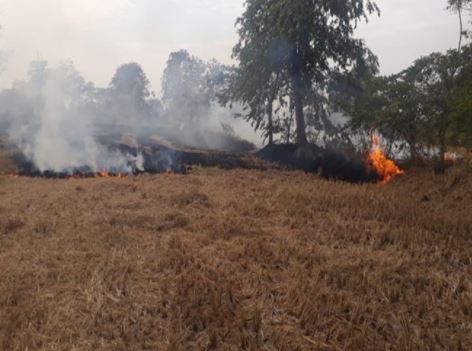 The paras that are left in the fields are being burnt uninterrupted after harvesting paddy from farmer harvesters and threshers to prepare for the rabi crop. This is not only polluting the environment, but also degrades the fertility of the soil. Apart from this, cattle also fall prey to the flames around them.

On January 2, on the instructions of the state government, water has been released from the Hasdev Bagh dam for cane crops in the canals from January 2, but farmers are burning palis in the fields with the preparation of Rabi crops. Due to the agricultural work being done with modern instruments, where months of work is being done in hours, then due to the negligence of farmers, its effects are also seen.

Flames are rising in the farm these days in village Deori, Zharra, Sarawani and other nearby villages of Bamnidih block including Sakra, Darrabhatha under the Sakti development block of Janjgir-Champa district. Farmers who harvested paddy from harvesters and thrashers do not want to take home the paras left in the field. In such a situation, a fire is started by them in Para, which causes smoke in the entire area including fire.